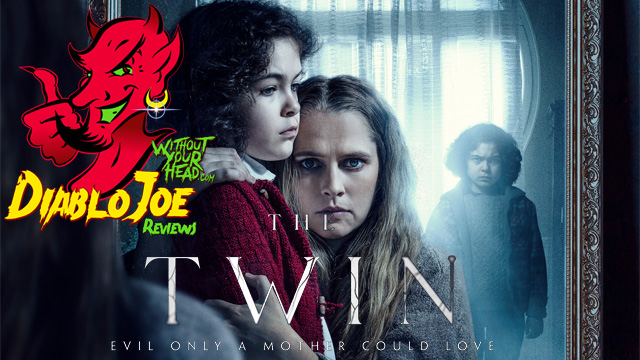 "The Twin"
review by Diablo Joe 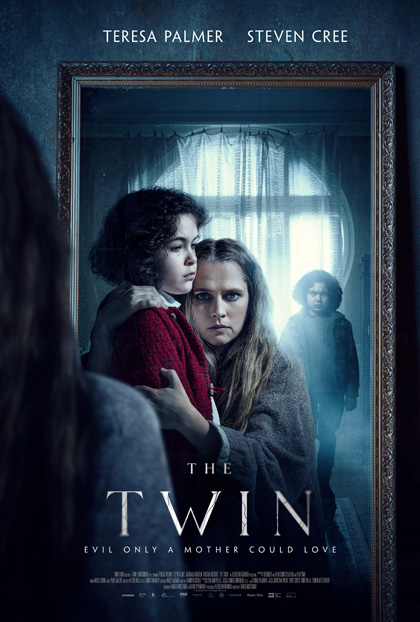 Folk horror has had an influx of truly remarkable films over the past few years. Some have been big-budget all-star affairs from celebrated directors, but many of the most compelling films have been smaller pictures. Quieter, these films have often featured a slow-burn build-up of tension, mood, and supernatural unease that, in the final act, rewards the audience’s patience. Shudder’s “The Twin” follows this trajectory for much of its story.

Seeking to recover from the tragic accident that claimed the life of one of their twin boys, Rachel and Anthony return to the idyllic Nordic village where Anthony was born. Eliot, their surviving son, struggles with the concept of the loss of his brother Nathan. In attempting to console the boy, Rachel realizes that there may be more to her son’s death than she could ever conceive. Her new home and the influence of Nathan’s death begin to cast a dark and terrifying cloud over her family, threatening Eliot and her very own life.

Director Taneli Mustonen plays his cards very close to the vest for much of “The Twin.” He slowly deals out details and suggests a myriad of dark interpretations for all that Rachel experiences. The audience experiences everything through her eyes and emotional state, and the result in these early scenes is unsettling and masterfully tense. Is Nathan possessing his brother, or is Eliot’s trauma causing him to channel his late twin? Mustonen keeps the possibilities open to both and so much more, bringing an air of constantly shifting speculation aided by the strong performance of Teresa Palmer as Rachel and the disconcerting presence of young actor Tristan Ruggeri. As the film progresses, the filmmaker keeps adding additional layers of mystery to his story. Ancient paganism and the town’s history come into play, and the complex puzzle the film has constructed gains facets and shadings.

Suddenly and disappointingly, the whole intricate world of mood and arcane possibilities “The Twin” has built for itself comes crashing down. In a pair of sudden, jarring set pieces, the movie first appears to be aping the conclusion of “Rosemary’s Baby.” It then immediately shifts tone and scale in an unasked for homage to “Midsommar.” Just as the audience struggles to grapple with these sharp cinematic turns, the film again twists its logic to completely obliterate the terror and compelling storytelling the movie established in its first two acts. It’s a plot convolution that stretches credulity and sense. Even a half-second of consideration for the events depicted in the first two acts reveals the absurdity of the picture’s conclusion, which hopelessly crushes the film.

Except for the film canon of M. Night Shyamalan, you would be hard-pressed to think of a genre film that utilizes such a supremely clunky plot contortion. It essentially renders the best parts of “The Twin” a massive audience gaslight. In retrospect, the film begins to show cracks in its façade as the plot delves deeper into the village’s history and mythos. The subplot involving an outcast community member and the manner with which the film seems to increasingly regard the townsfolk as a monolithic, creepy entity are both harbingers of “The Twin’s” direction shift away from the subtle nuance the film utilizes in its first half.

As mentioned above, one of the film’s best assets, and the one thing that remains resolute throughout the entirety of the film, is the creepy and effective performance of Tristan Ruggeri as Eliot/Nathan. He swings from sensitive to malevolent with convincing confidence few adult actors could muster.

“The Twin” is, perhaps, the epitome of unfulfilled promise and potential. Had director Taneli Mustonen sidestepped the absurd “Midsommar’s Baby” interlude, he could have again flipped his big plot twist back upon itself to at least partially redeem the film. The real tragedy of “The Twin” is that all its initial strength and quality are not enough to overcome the meaninglessness wrought by its conclusion.