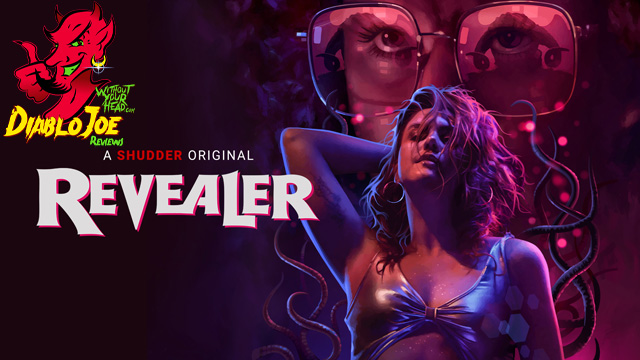 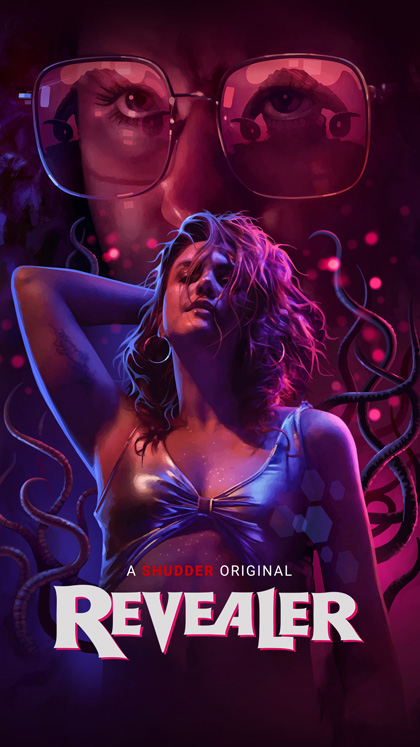 There’s a whole lot o’ justified love for the horror films of the 80s. It was an anything-goes era of filmmaking that brought a ton of gore paired with plenty of fun. Bright, garish colors, pulsing synth soundtracks, and that one-two combination punch of sex and violence were the era’s hallmarks. Shudder Original “Revealer” is a love-letter movie that doesn’t just nail the pastiche of that decade’s tropes but could completely pass as a lost film that had somehow slipped down behind the video racks for 35 years.

The film is essentially a two-fer, with the majority of the film entrusted to the interplay between those characters. And it’s to the credit of the script (by Michael Moreci and Tim Seeley, from a story by director Luke Boyce) and actors Caitlin Aase and Shaina Schrooten that the characters are so likable and enjoyable. Aase imbues Angie with tons of spunk and sass. She’s tough and perhaps a bit jaded but not at all ashamed of what she does and why she does it. Angie is a single mom doing anything for her son, but she still keeps her chin up. Playing someone with as much pious superiority as Sally, Schrooten never allows the role to fall into annoyance territory. She’s bitchy and judgmental, but never a bitch. And when forced to reveal how fragile her saintliness truly is, she’s terrific. Moreci and Seely have blessed the actors with crisp, witty dialogue that keeps their interactions—and the film—dynamic and fun.

Director Boyce keeps the film moving and engaging, despite “Revealer” pretty much being a single setpiece production. Working with cinematographer Robert Patrick Stern and production designer Sarah Sharp (both of whom’s colorful work on Jill Gevargizian’s “The Stylist” seems downright restrained compared to the palette in use here), Boyce has crafted a wholly believable period environment. It’s sleazily accurate, down to the sign over the peep booth drawer demanding “No Wet Bills.” Alex Cuervo’s score is the icing on the cake. Not all just throbbing synth patches; he mixes it up with screaming metal guitars and bluesy saxophones that are oh-so era-accurate and give the film lots of aural colors to match the visuals.

The effects are excellent and, for the most part, practical. Snapping serpentine demons besiege Angie and Sally and are as creepy as they are disturbingly phallic. And the reanimated corpse of Angie’s boss, Ray, gives the film probably its goriest scene. But if there is one area “Revealer” perhaps shouldn’t have followed some of the lesser 80s horror oeuvres, it’s in the overall thinness of its scares. The movie could have used a bit more “oomph” in the horror department. The film suggests that awful things are happening just outside, and it might have been nice to have a bit more of that find its way into the story. But it is again a testament to its two leads, their characters, and Boyce’s direction that we don’t notice the lack more.

“Revealer” is an entertaining, breezy throwback to one of the greatest eras of horror cinema. Its smart dialogue, stunning visual style, and terrific lead actors keep the film moving and thoroughly entertaining. It’s an 80s pastiche that never feels like it uses its influences as a crutch but rather as a fully-realized setting and environment. Had it just a few more really juicy horror moments, it could have genuinely cemented itself alongside the classic it so admires. But it's still a movie worth grabbing a bowl of popcorn and giving yourself over to.

This devil of a reviewer gives “Revealer” 3 out of 5 imps.