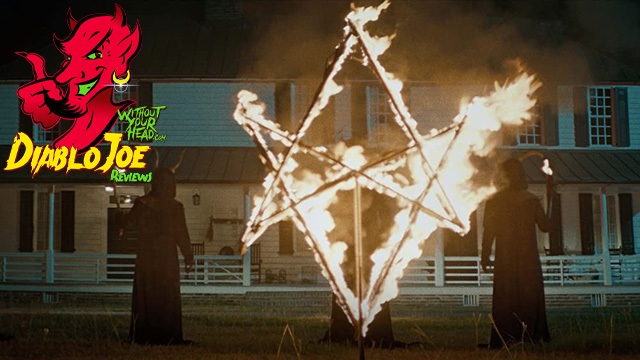 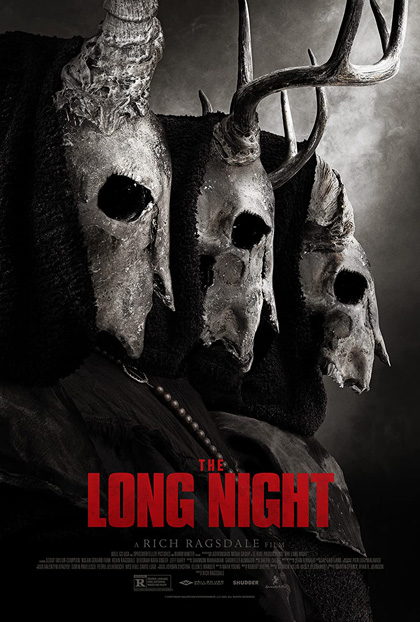 There was an era when the South and Satanism seemed to go cinematically hand-in-hand. In the 1970s, “The Devil’s Rain,” “Race with the Devil,” “The Brotherhood of Satan,” and others all depicted good ol’ boy devil worshippers, often tormenting hapless Yankee passersby. Shudder Original “The Long Night” revives a bit of that Inverted Stars and Bars theme in its tale of a young couple trapped and terrorized in a remote plantation house.

Grace and her boyfriend Jack venture to a gigantic Southern country estate house owned by a man who Grace has located with the mission of searching for her birth origins. They arrive to find their host absent, but in his stead, the pair find themselves surrounded by black-robed occultists who seem to have targeted Grace with a particular interest. And every effort the two make to escape is met with failure and deepening terror.

And that, really simply, is pretty much the plot and the entirety of “The Long Night,” an atmospheric and, at times, visually striking film in which not much really happens. And it’s a bit of a shame because there are a lot of commendable elements, just not enough to prop up an entire motion picture successfully. After an expository NYC intro establishing our protagonists, the film opens, as so many films seem to do in this age of easy-access drone photography, with long, protracted, dream-like drifting vista title shots of our characters driving through the beauty of the Southern countryside. The two get the obligatory “Y’all ain’t from around here” treatment at a roadside gas station, followed by another series of, now more ominous, long, protracted, dream-like drifting drone shots.

It's this sort of visual padding that plagues the film throughout. Once the film gets into what should be the meat of its horror storytelling, it instead falls back on a repetitive series of scenes of the mysterious robed and deer-skull-adorned cultists standing menacingly in semi-circles, torches ablaze. There is much gesticulating, howling, and displays of supernatural powers. It’s all a needless cat-and-mouse game, as it soon becomes evident that there is nothing genuinely preventing the group from just overtaking our young couple and getting it all over with.

Scout Taylor Compton (Laurie Strode in Rob Zombie’s “Halloween” films) is Grace, and the actor probably fares best out of the cast. She’s likable enough, and her character is perhaps the best written in the picture. Compton plays Grace with just enough sympathy without ever falling into the maudlin. Far less blessed is Nolan Gerard Funk. No matter how good he might actually be, Jack is written as such the boorish and snotty, snivelingly privileged ass that no actor could make the character appealing. From the get-go, he is used to demonstrate that broadly stereotypical (and tired) divide between the North and South trope. And an early subplot involving a visit to his equally elitist parents is unnecessary and quickly forgotten.

In a supporting role, the always welcome Jeff Fahey provides a sadly all-too brief bit of dynamic to the proceedings. Similarly, the luminously otherworldly Deborah Kara Unger is equally underutilized in her role. Had the film not been so doggedly reliant upon its repetitive elements and spent a bit more valuable screentime with these two talented actors, its predictable ending payoff might at least have been more enjoyable to reach.

Director Rich Ragsdale and cinematographer Pierluigi Malavasi have filled “The Long Night” with tons of atmospheric imagery. Some of it is genuinely breathtaking (one shot of flames exploding behind the cult’s Master is particularly stunning). But the sheer repetitiousness of Dutch-angled Satanists, slowly raising their hands in a suggestion of arcane significance, grows weary after a while. There’s a sort of gravitas suggested in these shots, aided by the portentous Roman-numeral delineated chapter cards, that implies so much more than is delivered. Even though “The Long Night” never quite bores the audience, it never thoroughly excites them either.

In laying siege to this couple trapped in a plantation home, these demonic “Big Bad Wolves” are all huff and not enough puff.

This devil of a reviewer gives “The Long Night” 2 out of 5 imps.