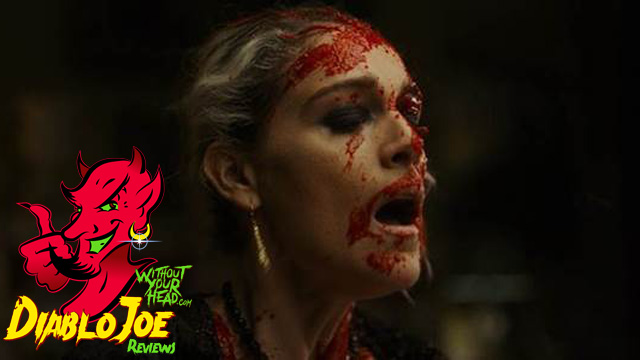 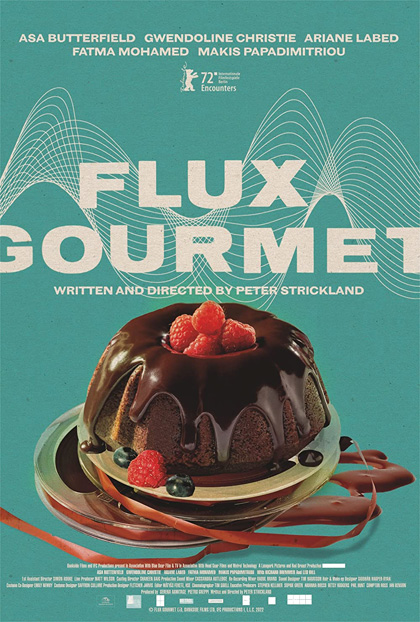 The films of Peter Strickland are among some of the most idiosyncratic and unique in contemporary filmmaking. He has made his mark as a director of singularly distinctive and cerebral experimental cinema with a scant five features to his oeuvre. Probably the film that first really piqued audiences' attention was his second film, 2012's "Berberian Sound Studio," an oblique, nightmarish love letter to Giallo cinema. His third, the erotically charged “Duke of Burgundy,” was perhaps his most exquisitely crafted film still to date, while “In Fabric,” a strangely effective horror film about a homicidal red dress (yes, you read that right), showed an absurd, almost playful side to his vision.

“Flux Gourmet” continues to push that absurdity even further. It is the story of a trio of “sonic caterers,” performers whose instruments are food. Working in an intuitional residency under the patronage of its director, the group bicker and struggle to find common ground between themselves and their benefactor. Meanwhile, their progress or lack thereof is followed diligently by a writer dealing with his own gastro-related struggles. Beset with embarrassing flatulence he desperately wishes to keep hidden, the band’s chronicler finds himself drawn deeper into and more a part of their performances.

It's through the voice and perspective of the writer, Stones, that we experience “Flux Gourmet.” His discomfort, both emotional and gastrointestinal, is palpable to the audience. Who amongst us has not been mortified by a passing of wind while surrounded by others? His character is a literal Greek chorus (the film’s narration being in that language) for the film. And as Elle di Elle, leader of this culinary collective, struggles with her bandmates and the compromises requested by director Jan Stevens, Stones finds himself front and center in their concerts. It’s a nightmare of unfettered discomfort and indiscretion.

Strickland has built a trusted and ever-growing coterie of actors throughout his body of work, particularly women. Chief among these is Fatma Mohamed, who has appeared in all five of his features, as well as his entry in 2018’s anthology horror, “A Field Guide to Evil.” As Elle, she is fearless, and it is obvious that Strickland and the actor have implicit faith in one another. Desperate to validate herself and maintain dominance over her band, Elle is ruthless and manipulative, and Mohamed gives the role everything.

A more recent addition to Strickland’s company, the towering presence of Gwendoline Christie as Jan imbues the institute’s director with a physical capacity that matches her personality. But Christie gifts Jan with nuance and shades of fragility while draped in an oddball haute couture that exemplifies the off-kilter costuming choices Strickland sometimes makes for his female characters. As the unctuously pedantic Dr. Glock, Richard Bremmer is grotesque and delightful. With his gleeful interest in Stones’s bowels, Glock is even more disturbing than Bremmer’s masturbatory storekeeper from “In Fabric.”

Newcomers to Strickland’s world, Asa Butterfield and Ariane Labed, as Elle’s beleaguered bandmates Billy Rubin and Lamina Propria, acquaint themselves with ease. With his wide eyes and shock of shades-of-Ian-McCulloch hair, Butterfield gives us a sensitive boy-artist searching for approval and his own voice. Labed’s Lamina is a woman stretched as thin and wan as the membrane from which she takes her name. But likewise, she is strong and resilient, unafraid to challenge the dominance in the group of her former lover, Elle.

But it is Makis Papadimitriou who is the most impressive course on “Flux Gourmet’s” menu. As noted previously, Stones is our avatar, and it is Papadimitriou who makes us empathize with every bit of dyspepsia, worry, and shame the writer endures. We feel the horror of “Flux Gourmet” thanks to Stones and the actor. He is outstanding, and the sight of the meek, balding Papadimitriou, his drab attire and short, stocky frame contrasting with the other’s fashionable garb and Christie’s towering stature, stands out as much as his performance.

If Strickland's work has a consistent thematic feature, it may be the conflict of dominance. In “Berberian Sound Studio,” it is director versus soundman, “Duke,” the roleplay between lovers, and “In Fabric” presents the power struggle between commerciality and customer. Here it is multifold. There’s the conflict between the artist and outside influences and interests. The manipulation of Stone by Glock is exemplary of an unbalanced patient/doctor dynamic. And of course, we also have perhaps the most perfect example of band dynamic pettiness since “This Is Spinal Tap.” The interplay of these three dynamics keeps “Flux Gourmet” both fun and engaging.

Strickland creates here, as he has with all his films, a wholly insular world for his characters to inhabit, with all of their peculiar quirks and mannerisms. Throughout his movies, the resoluteness of the universe he presents is palpable. Casual filmgoers might draw a vague comparison to David Lynch as a filmmaker trafficking so frequently in such surreal territory. With his stunning visual sense and intellectually complex worldview, especially when it comes to the elite, the filmmaker Strickland most aligns with is his countryman Peter Greenaway, the director best known for “The Cook, the Thief, His Wife & Her Lover.” But a less obvious comparison would be David Cronenberg. While some might conclude that this results from “Flux Gourmet’s” disquieting biological aspects, both directors are confident masters of creating slightly skewed and ever-splintering realities that their characters accept without question.

“Flux Gourmet” may not quite reach the perfection of the director’s “Duke of Burgundy,” but for followers of Strickland’s work, it is undoubtably a must see. For film fans who enjoy audacious, out-of-the-box cinema it will stand out against everything else they might encounter these days. “Flux Gourmet” is a meal of sonic and visually unsettling earthly delights.

This devil of a reviewer gives “Flax Gourmet” 4 out of 5 imps.