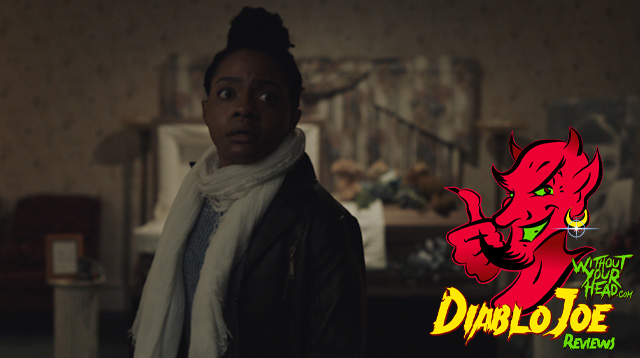 The Spring of 2020 was a time filled with fears, paranoia, and uncertainty. Faced with questions of health and survival, the tensions and terrors pushing and pulling on the mental health of the entire world were worsened by isolation and a sudden deficit of human contact. In ways that modern society had not seen, people were taken, with little warning, from their friends and family with horrifying finality.

It is in this world that the story of “The Harbinger” unfolds.

Monique has been isolating at home with her brother and father in the early months of the pandemic. They have been carefully doing all the proper rituals and precautions. When Monique’s friend Mavis reaches out, panicked and troubled by dreams she has been having, Monique breaks from her family to help her friend. But as the two begin their bubble, it becomes apparent to Monique that Mavis’s nightmares may be more than just the product of mental stress and social separation. As she, too, becomes haunted by visions of a Plague Doctor-clad figure, Monique begins to believe that there is something far darker afoot.

It's a bit surprising that cinema, particularly horror, hasn’t explored the seclusion and uncertainty of pandemic times haven’t more than it has. There have been a few allegorical horror movies and some that were shot during lockdown, utilizing the sort of online social practices as part of their structure. But “The Harbinger” examines the emotional reality of those times in a manner not quite yet done before. From the fastidious bleaching of groceries and other goods to questioning if children are immune, the film touches on so many experiences the audience will have likely shared in what seems like ages ago. The result is effective and a terrific groundwork for its dark, paranoid phantasmagoria.

It's the cast that sells everything here, particularly Gabby Beans as Monique and a truly potent performance from Emily Davis as Mavis. Playing expertly off each other, they run the gamut of emotions together. The apprehension as they unmask in the company of one another for the first time is absolutely palpable, followed by the effusive joy of hugging a friend for the first time in what must seem like an eternity. Cathartic moments, both, that so many viewers will likely know too well. But of course, this is a horror film, and it is Davis, in particular, who is so good at expressing the feeling of dread that still hangs like a pall over them. Hers is a thoroughly believable portrayal of a woman whose self-confidence in her own sanity is fraying apart. Beans, too, adeptly takes on this mantle of mental self-doubt as Monique begins to delve deeper into the mystery and reality of the pair’s nightmares.

It's in the more supernatural parts that “The Harbinger” is slightly less successful. Not in its creepiness and sense of unrest and terror. Writer/director Andy Mitton deftly handles that, aided by his own unsettling score and editing, but in how the film reveals its character’s knowledge of the evil they are facing. In an unfortunate reliance on telling, rather than showing, the women enlist, via the Internet, the aid of a “demonologist” who lays out, perhaps a bit too plainly, the force the pair are facing. The film might have gained a more profound sense of terror had the function of her character shifted to the events and experiences that befall Monique and Mavis instead. This may have resulted in a more ambiguous movie, but one where the horrific outcomes for both women may have become even more unsettling.

“The Harbinger,” screening as part of Fantasia Fest 2022, is an extremely well-made film. Mitton is both an intelligent writer and a director who knows how to shape mood and make use of a fine, talented cast. One wishes the director had taken a bigger chance on his audience’s capacity to thread together the film’s supernatural puzzle pieces for themselves. “The Harbinger” picks uncomfortably at a pandemic memory scab and barely misses the chance to provide elements dark and disturbing that would have given a similar emotional gut punch.

This devil of a reviewer give “The Harbinger” 3 out of 5 imps.