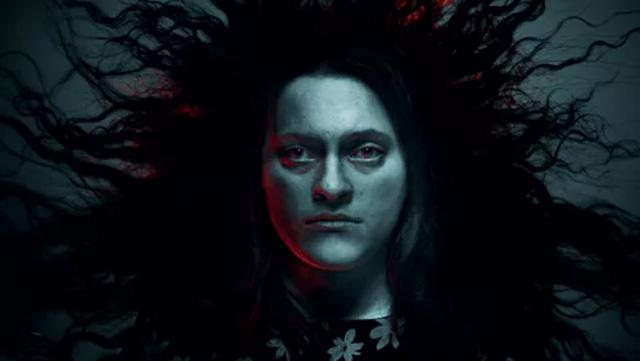 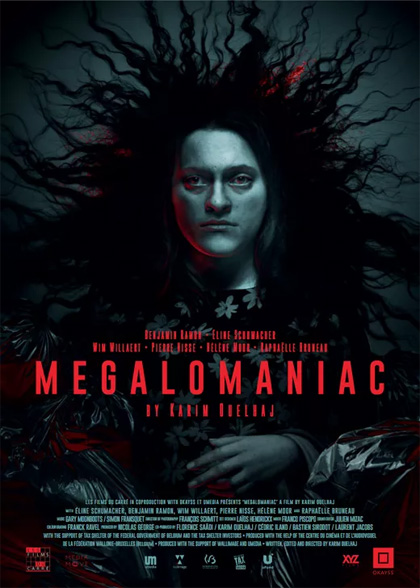 The cycle of life. Birth to death? Perhaps. Or could one argue that it is generational? Isn’t the purpose of life to beget life and continue oneself in one’s progeny? Coming from Belgium and part of Fantasia Fest 2022, “Megalomaniac” opens with the miracle of childbirth made hellish nightmare as the film brings its alt-protagonist Martha into the world with screams drenched in blood.

Now grown, Martha’s world is still no less horrific. Her coworker’s misogynist taunts have transitioned to sexual assault and serial rape. At home, her brother Félix demeans her and controls almost every aspect of her life while leading a secret life torturing and killing women. Martha’s sanity seems stretched thin, and demonic and disturbing visions besiege her. Discovering one of Félix’s intended victims, the unfortunate woman becomes her quasi-play pet, unlocking a dark side of Martha’s psyche and pushing her into new and shadowy behavior.

If this makes “Megalomaniac” sound like a joyless, bleak, and nihilistic film, indeed it is. But Martha’s story and writer/director Karim Ouelhaj’s handling of the themes of family, posterity, and human evil is so compellingly told that it's hard to turn away from it. And not in the morbid curiosity we grant some gory segment on the evening news or a horrific car accident. There is no voyeuristic satisfaction to be gained by the audience. This is a film of pure, unrelenting tension punctuated by sudden and startling violence. “Megalomaniac” will likely leave you stunned, drained, and more than a little numb, but it will also prod your thinking and leave you with questions you may not wish to have answered.

The film intimates that Martha and Félix’s father was the notorious Butcher of Mons, a serial killer of women who terrified that Belgian city in the late 90s and was neither caught nor identified. Félix has taken on his father’s mantle, suggesting that, perhaps, as was the father, so be the son. Martha, too, has been shaped by their father’s horrors. But the men around her have exerted so much dominance that it isn’t until someone more vulnerable comes along that Martha’s sadism begins to manifest. And the film implies that these two are not to be the end of that cycle.

Ouelhaj is deeply indebted to a trio of cast members. Benjamin Ramon is unnerving as Félix. Decidedly nocturnal in presence with his translucent complexion and haunting eyes looking unblinkingly from beneath a large, eyebrow-less forehead, his quiet dominance turns into violent action with such terrifying suddenness that the audience is forever on guard whenever the actor is onscreen. As Martha’s “Kitty,” Hélène Moor gives one of those fearless performances that such a part requires. Naked, covered in filth and her own blood, it is the sort of role that many would consider thankless. Moor, however, never lets us lose sight of her character’s humanity.

But it is Eline Schumacher who is simply startling as Martha. Childlike without being simplistic and stoically enduring relentless abuse, Martha’s pain is always just under the surface, thanks to Schumacher’s masterful performance. As uncomfortable and unsettling as we might find it, it is Martha we are meant to identify with and understand best of all. Schumacher deftly takes us through her fractured, broken hell.

If there was ever a film where the visuals matched the darkness of its theme, it is this. “Megalomaniac” is a film that exists in the fringes of its blacker-than-black shadows. Even the lighting of the factory Martha cleans seems dim and insufficient. But when the director takes us into the sprawling gothic home Martha and Félix inhabit, the screen becomes dominated by darkness. But Ouelhaj shows us that horrors most definitely live and lurk in those shadows.

“Megalomaniac” is not a film that will (or should) leave a viewer with any sense of catharsis or exhilaration. This is not a film that wants you to feel at ease after watching. But it is not a cruel film. Ouelhaj is not trying to punish his audience. Though we may see things through Martha’s eyes, we are not her proxy. Instead, like a sharp slap, “Megalomaniac” rouses us from our day-to-day stupor and keeps us on edge. We just may not like the thoughts we have to face once awake.

This devil of a reviewer gives “Megalomaniac” 4.5 out of 5 imps