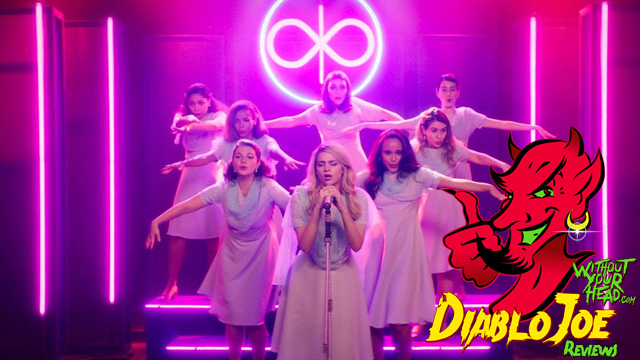 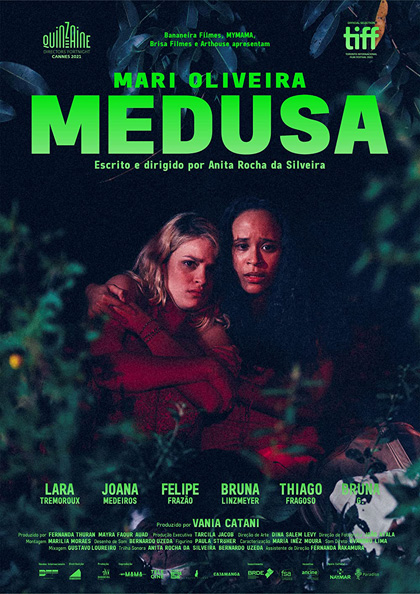 Brazil is a country that has experienced many political and moral parallels with the United States. A strong-man presidential autocracy and a return to conservative religious paternalism are just some of our shared woes. “Medusa” is Anita Rocha da Silveira’s deeply critical and pointed critique of how a paradigm of repression can lead to shame, authoritarianism, and violence, with women, in particular, at its brutal, sharp end.

Silveira’s film follows Mariana (played by Mariana Oliveira in a powerful and nuanced performance), a young woman on her way to being the epitome of a pious, Christ-fearing example of womanhood. She is attractive, popular, and part of a group of girls for whom setting this proper example is everything. So much so that they roam the streets at night, masked, shaming and brutally beating any woman who does not conform to their moral compass. When one of their vigilante attacks goes awry, leaving Mariana disfigured, it sets in motion a quest for self-validation. But her search, Mariana uncovers just how hypocritical, ugly, and dangerous her world actually is.

“Medusa” shows us the duplicity of a world that expects women to be both virginal and trophies of physical perfection. Mariana’s best friend Michele, the leader of her group, is a popular social media presence, extolling beauty tips and how to be the perfect young woman for Christ’s (and mortal man’s) approval. Even so, the girl’s male counterparts, the militant “Watchmen,” Vigilantes for Zion, slut-shame even these girls during a ministry-approved mixer. When Mariana is injured, her facial scar, while hardly horrifying, results in the loss of her job at a plastic surgeon’s office, her appearance too disturbing in a place that exalts beauty.

Her disfigurement parallels a legendary incident where a famous young actress named Melissa was brutally burned by a masked “angel” seeking to punish her for her sinful behavior. The girls strive to emulate this “angel” in their nighttime patrols. But, rather than seek out the identity of the attacker who they mimic, the girls are obsessed with what happened to Melissa, and this search for answers goes hand-in-hand with Mariana’s search for her own identity. Mariana finds work in a facility for catatonics, and her belief it houses Melissa leads to a passionate relationship with one of her co-workers.

An evangelical minister uses the girls and the Watchmen in his pursuit of political office. Silveira makes clear the danger of figures such as Pastor Guilherme, especially once they have marshaled the support of militant-leaning youth. As the “Medusa” progresses, The Watchmen become an ever more violent and terrifying presence. Even the girls, it seems, are not immune from the boys’ physical demonstrations of masculinity and dominance.

“Medusa” is a film deep in symbolism. One girl mentions how “M” marks the names of shameful women, such as “Mary-Magdalene,” and the false corollary between physical and moral perfection. In mythology, the Medusa was the doom of men until tricked into seeing herself and destroyed. Here, Anita Rocha da Silveira throws that mirror in front of false and judgmental piety, revealing its ugliness and hypocrisy unto itself with the hopes of similar destruction.

A film with a lot to say, “Medusa” is ambitious in its mission. Silveira mostly succeeds in her undertaking, but some might wish that this allegorical world she built possessed a bit more scale. It feels, at times, too small and insular, and if the ambitions of the girls, Watchmen, and specifically Pastor Guilherme possessed a bit more expansive scope, so would have the film’s cautionary message. Some of its many complex parts don’t mesh as well as they could have, and the film’s ending doesn’t quite provide the catharsis da Silveira was seeking.

“Medusa” is still a potent indictment and cautionary warning about the dangers of a parochial, oppressive society. It makes its point effectively without ever stooping to tedious polemics or preaching. Its message is clear but unforced thanks to the emotional grounding of its characters, in particular Mariana. Silveira and “Medusa’s” lesson is essential, not just to Brazil, and not just to America, but to the whole of contemporary culture. And it is told with impact and facility.