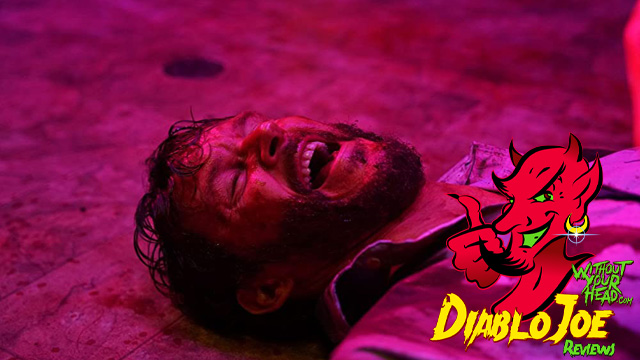 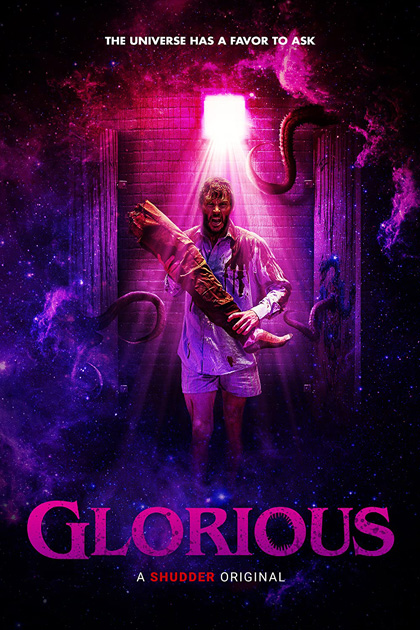 A man is trapped in a bathroom with a demigod tasked with destroying the world and is told that he is the only person who can save humanity. Terrific idea, right? Yes, and pretty bonkers to boot. It’s the premise of Rebekah McKendry’s first solo directorial feature, “Glorious,”—now streaming on Shudder— a good film that may likely divide some of its audience as to just how far along the spectrum of “good” it is.

Essentially a two-character, single set piece for much of its 79-minute runtime, it features “True Blood’s” Ryan Kwanten as Wes, a man on the run from his past following a traumatic disillusionment of his relationship with Brenda. Wes drives aimlessly, wallowing in booze and his misery, when a roadside bathroom stop introduces him to Ghat, a demigod (voiced by the always great J.K. Simmons) concealing himself in a glory hole bathroom stall. Disillusioned with its work, the power that formed the Universe has tasked Ghat to destroy its creation. But the demigod has been hiding, unwilling to follow through with his mission, and he has little time to convince Wes to make a self-sacrifice that will aid Ghat in continuing to keep himself hidden from this power. And, in doing so, save the Universe and humankind.

“Glorious” is, at times, philosophical, and at others, absurd. It veers from the stylish to spare (its low budget obvious but never distracting) to gooey over-the-top. Kwanten is miles away from Jason Stackhouse’s bumbling sexuality. Here, he is disheveled, unshaven, and so often covered in all matter of vomit, feces, and blood that Ash Williams might find a kindred soul in Wes. Always convincingly able to convey genuine befuddlement, Kwanten is perfect as a man lost in both his situation and his soul. With his commanding voice doing what it does best, Simmons is the ideal selection for a being so vast in scope that it would be hard for any mortal to comprehend its visage. At another point in time, this would have been a Morgan Freeman role, but Simmons has proved himself able to portray the gamut of playful, paternal, and terrifying with aplomb.

As noted earlier, “Glorious” bucks the recent trend of long run times that digital media has made so feasible at all levels. But even that may seem excessive to some. At points, the film seems padded. We don’t get to Ghat’s identity and purpose until near the film’s middle, and much of the pacing and side action, including Wes’s attempted escape from the bathroom and a visit from a property supervisor, adds little to the film at its core (though the latter does result in some gross fun). Director McKendrey’s previous film, co-directed with her husband, was 2018’s “All the Creatures Were Stirring,” an anthology film. And, to some, it may seem that it could have been truncated and fit better as part of a longer string of tales. “Glorious” would have made a great 30-minute “Twilight Zone” episode. It certainly fits that mold with its high-concept themes and the moral choices it depicts.

Still, while the film reveals what purpose Wes has in Ghat’s mission and indeed what he is running from (something that some viewers may figure out ahead of the game), the real why of Wes in all this cosmic mess is never explained. “Glorious” has moments of great humor and ludicrousness, but it also seems somewhat strangely restrained. It cries out for a chance to be really, truly, bonkers. As it stands, it does often resemble an old “Twilight Zone” in its tone.

“Glorious” is an entertaining film, well worth watching, but while some may love its off-kilter take on its bizarre premise, others may find it more of a trifle. But even trifles can be fun, and “Glorious” certainly is that, even if it is not quite glorious itself.

This devil of a reviewer gives “Glorious” 2.5 out of 5 imps.