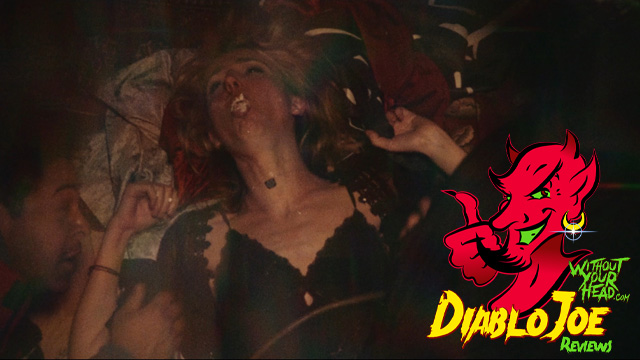 Diablo Joe Reviews All Jacked Up and Full of Worms

"All Jacked Up and Full of Worms"
review by Diablo Joe 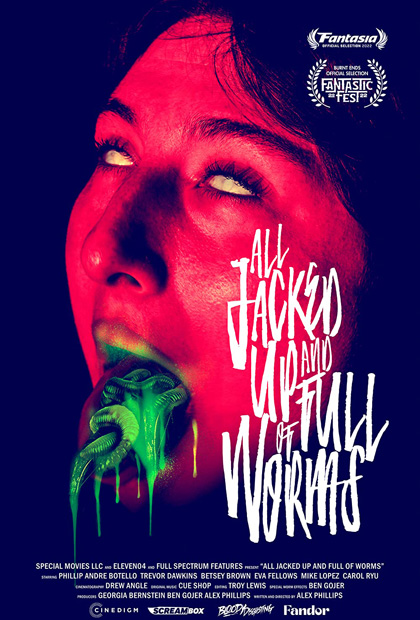 "All Jacked Up and Full of Worms"

With a title like that, you know the film isn’t going to be something for all tastes, even a horror fan’s. Writer/Director Alex Phillips’s bizarro foray into a sexually deviant and violent world where psychedelic Vermes are the latest addiction will probably test the mettle of many a genre aficionado. But not for the reasons you might expect.

The story, what there is of one, surrounds Roscoe, a clean-up man at a sleazy love motel, and Benny, a deviant with a rather prurient interest in fatherhood. Roscoe is struggling with the odd triad that has formed between him, his girlfriend Samantha, and her friend Jared. Benny is obsessed with his newly acquired infant sex doll and the hope that he may one day replace it with a child of his own. Roscoe and Benny meet, fall under the spell of the drug-like earthworms of the title, and things go awry for the two of them from there. Violent altercations with the clown-faced street-punk Biff and his trashy girlfriend soon follow, and the pair’s world spirals into ever-stranger territory.

There’s a place for offbeat, gonzo films that are more psycho-experience-heavy than narrative. Just recently, Stefan Lernous’s “Hotel Poseidon” and Ryan Krueger’s terrific “Fried Barry” have pummeled their audiences with unsavory and hyperkinetic assaults of sensory-overloading imagery. “All Jacked Up and Full of Worms” starts quite conventionally. The soundtrack bounces along playfully like the opening bars of Aimee Mann’s cover of “One” from the film “Magnolia” and, as we meet our characters, there’s a low-key, almost sedate, air to their interactions and performances. But soon, things become more sordid, aggressive, and angular, with the attachment to reality becoming more tenuous and less critical to Phillips’s cinematic vision.

But, as “Worms” delves deeper into this stylistic morass of sleaze and mayhem, it’s difficult to discern what Philips’s intentions are. Is there any point or meaning to the unfolding tableau that the filmmaker spools out over the film’s short (71-minute) runtime? The worms seem analogous to a number of different drugs—psychedelics, cocaine, heroin—but is it meant to be a cautionary element or just a McGuffin? In truth, they make up a far less significant aspect of the film than the title would suggest. Part of the movie’s problem is that none of its elements are particularly well-established, starting with the characters themselves. Despite being one of the two principles and occupying half of the film’s screen time, Roscoe is pretty much a blank slate. The same could be said for most of the others. Id-driven and two-dimensional, they simply seem to exist there for the machinations of a scene. The actors are fine in their roles and should be commended for drawing up and delivering more than they probably found on the page.

The one exemption, and who many viewers will have issues with, is Benny. The choice to make him the deepest drawn and, in many ways, the “hero” of the film is a decision that some will definitely question. His apparent infantophilia and the projection onto his doll the role of his “son” is perhaps the most troubling aspect of “Worms,” and the casual, almost comedic, treatment of Benny’s obsession is more exploitative than benefits the film.

Alex Phillips is obviously a director with skills and talent. He has a terrific visual sense, aided by Drew Angle’s retro-styled cinematography. And the fact that his cast still stands out despite the underwhelming depth of their characters can’t be chalked up simply to casting or chance. But “All Jacked Up and Full of Worms” seems to be expected to stand up on its shock factors alone. But simply unfurling weird set pieces and grotesque imagery is not a successful recipe for a film without some sort of thematic reasoning underpinning it. And Phillips, if he has one, isn’t successful in conveying it to his audience.

This devil of a reviewer gives “All Jacked Up and Full of Worms” 2.5 out of 5 imps