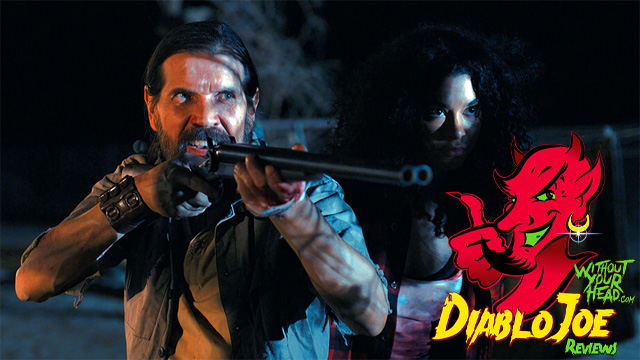 "Night of the Bastard"
review by Diablo Joe 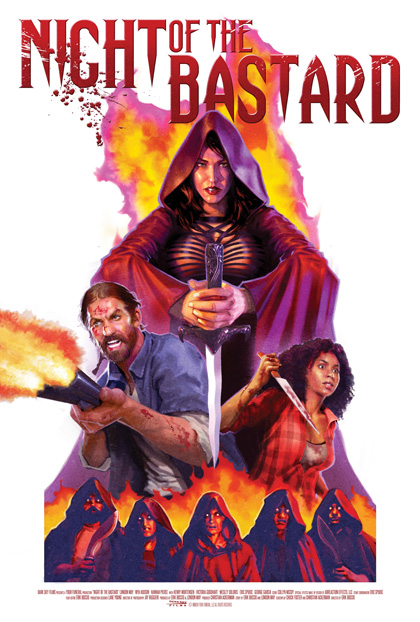 "Night of the Bastard"

The film opens grimly enough. It is the early 80s, and an expectant couple is captured by Satanic cultists and sacrificed in the remote wilds of a desert night. We witness the horror of their unborn child ripped from its mother’s womb by the cult's priestess.

Cut to 40 years later, and a trio of young campers, including the spunky Kiera, find themselves besieged by members of the same cult, seeking to continue their ritual these many decades later. Kiera forms an unorthodox alliance with desert hermit Reed and the two struggle to fend off the cultists and survive the titular night.

“Night of the Bastard” takes a serious nod from the Satanic cult exploitation films of the early 70s. With the Mansons still fresh in the public’s mind and the Age of Aquarius evolving into a pop culture obsession with the occult and the supernatural, films like “Brotherhood of Satan” and “Race with the Devil” pitted hapless ordinary folks against robed worshippers of the Dark Lord. These were the sort of cinematic antagonists that could easily have been outlaw bikers just a few years before. As such, “Night” dispenses with any pretense of being anything other than the occult actioner it is.

And it’s the action that dominates more than anything occult. As Kiera and Reed hole themselves up in Reed’s home, defending themselves against the motley group of demon worshippers, the proceedings are definitely more fisticuffs than fantastical. Director Eric Boccio does keep things lively. But the protracted knock-down, drag-out fighting makes the audience wonder how neither side takes better advantage of their situations, especially when a brawl between Reed and one of the cultists takes place in front of a wall adorned with his bow-hunting gear.

When the movie dives into its rituals, it breaks out from its stereotypical people-in-peril mold. The cultists have a twisted backstory they reveal to the pair of victims, and its creative perversity adds some spice to the story. It’s pretty inventive and original, and the film unspools it in just the necessary way and at the perfect time.

This is not the sort of film where you expect any award-winning performances, but the cast seems eager and game for the roles at hand. There’s some actual chemistry that develops between London May (who co-wrote the film’s original story along with Boccio) and Mya Hudson, making the evolution of the relationship between Reed and Kiara believable. Hannah Pierce, as high priestess Claire is fine enough in her role, but sadly, Talia Martin eclipses her in the film’s opening sequence. Portraying the younger incarnation of cultist Maxine, who returns later in the movie as a grizzled crone (played by Victoria Goodart), Martin is so delicious in her devilishness and dark beauty that we miss her flair for the remainder of the picture.

“Night of the Bastard” isn’t going to be considered groundbreaking by anyone. Its workaday thriller story and style do the job, but probably without it being a must-see by anyone’s standards. But it’s entertaining and keeps its audience engaged without complaint. If you feel like you need a bit of old-school deviltry in your evening, you could curse yourself with far worse.

This devil of a reviewer gives “Night of the Bastard” 2.5 out of 5 imps.