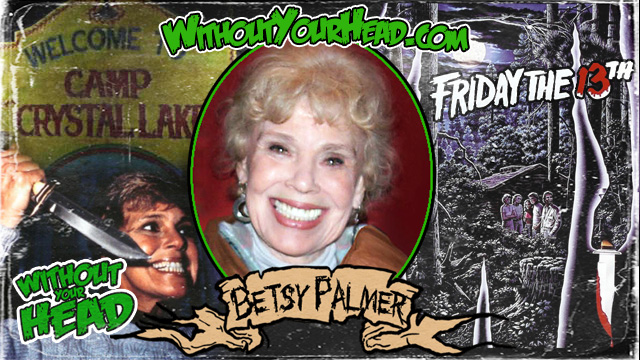 Friday the 13th edition of Without Your Head radio with Betsy Palmer of Friday the 13th, Warrington Gillette of part 2 and Larry Zerner of part 3!

Awesome show! That weird "heart beat" sound during the Betsy Palmer interview was freaking me out!

Originally posted by Golgo 13
Awesome show! That weird "heart beat" sound during the Betsy Palmer interview was freaking me out!

John lost power so we had to tape it on his laptop with abtteries over the phone. So it had a weird thumping noise, he was afraid people would think we were overly excited

. Maybe it added to the feel of the show.

I really liked this show.. was very good..
It is really interesting listening to all the behind the scene things and the history behind the movies..

Great show guys!
I'll try to make the scene next time around.

That was sweet, I liked Betsy Palmer the best, but the other two were cool.

The heart beat thing made it SOOOOO cool.

Yeah the heart beat made it the Poe interview.

Ever read any Lovecraft, Dish?

I think the movie Ms. Palmer was talking about (with Harrison Ford) is "Bladerunner."

Originally posted by Robo
I think the movie Ms. Palmer was talking about (with Harrison Ford) is "Bladerunner."

Thanks man, I wasn't sure what she meant at the time.

I have to admit that I've never been a big fan of the Friday the 13th series, but the interviews were very interesting and made me want to watch at least the first 3 movies over again. Ms. Palmer is sweet. --John, you've got to talk more... so we can enjoy your smooth, velvety voice.

I loved this episode because I didn't have to ask anyone anything.