Review of "Hell Fest" by The Headless Critic 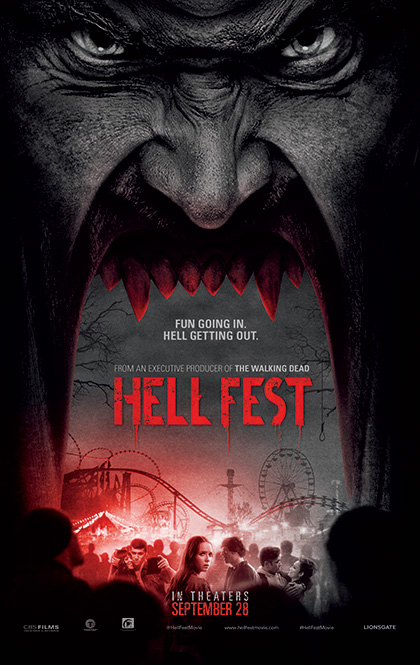 Welcome to Hell Fest, the scariest horror fright theme park full of mazes, rides, actors, entertainment and all the scares your mind can handle. Descend through three levels of frights until you reach the ultimate Hell! The first level is your typical horror haunt with all the scares you’d expect from the most horrifying of haunted houses. If you can handle more and you sign the waiver that we’re not responsible for what happens to you, the second level gives us access to do to you whatever we please. It’s also the only way to descend to the final and most frightening level, Hell! It’s “Fun getting in, Hell getting out."

Natalie (Amy Forsyth) just surprised her best friend Brooke (Reign Edwards) by actually making it in to town to see her. Brooke just surprised Natalie by inviting Taylor (Bex Taylor-Klaus) who isn’t exactly Natalie’s friend, to join them for the weekend. Gavin (Roby Attal) who has a crush on Natalie just scored them all VIP passes to the hottest ticket in town this October, Hell Fest. Three couples enter the three levels of hell not knowing that the real terror at Hell Fest is the actual killer on the loose who’s stalking them.

For the last forty years we’ve seen tons of slasher remakes of John Carpenter’s classic Halloween as this year’s sequel reminds us. Most don’t seem to realize that Halloween is terrifying because of realism in its characters and its killer not the masks and murders. The Gregory Plotkin directed Hell Fest is an attempt to put Halloween in a horror theme park. The masks are plentiful; realism however is as fleeting as the flashing lights. The horror park backdrop looks cool but removes the viewer from reality adding little in the way of scares for the viewer. If anything it adds laughter through the characters false scares. After not knowing the killer the entire film, Hell Fest does attempt to create realism in their killer by the end. The cast to die barely has time to make you care before they’re killed off.

Plotkin directed what most consider the worst Paranormal Activity movie Ghost Dimension. His second feature is written by a team of writers in a highly uninspired script. It’s not that Hell Fest is bad, it’s a typical slasher that horror fans will mostly enjoy. We’ve just seen so many versions of it before. Many of which are better. I’ll admit I’m a sucker for a basic mindless slasher and may have liked this one better than it actually is.

Horror faithful looking for “Candyman” Tony Todd should know he’s little more than a cameo. He does provide his unique voice as an excellent guide through Hell Fest but his on screen time is limited. The cast of three couples do fine with their limited characters. Bex Taylor-Klaus is a good actress with an outside Hollywood look that I enjoy. Her character Taylor is very annoying perhaps intentionally so. She does have my favorite would be kill that involves a blunt guillotine with a faulty drop switch. The kills otherwise are just as uninspired as the script but they were going for realism over being outlandish.

Any success at the box office will probably spawn another horror series. Hell Fest is a copy that's unoriginal and surely won’t spawn sequels for decades to come like its slasher predecessors. I’d expect even the first sequel to be straight to VOD. I always support horror getting a wide release in theaters. It’s just rare that the best horror is seen there. In this instance they even got the wrong horror fest. Similarly titled to this year’s release of Blood Fest which also takes place at a scream park, the similarities end there. Blood Fest is Cabin in the Woods at a scream park while Hell Fest is Halloween at a scream park. Neither is original but Blood Fest is a lot more fun and not as overdone. Welcome to Hell Fest!