Review of "Blood Fest" by The Headless Critic 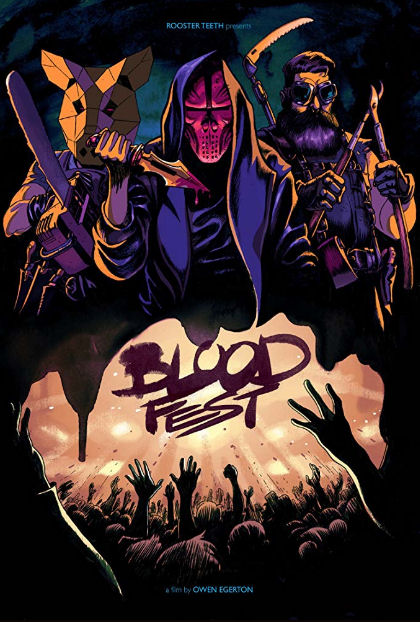 “Blood Fest is a gathering of freaks and degenerates celebrating mindless violence and gore! It’s going to be extraordinary!”

An outdoor arena has been created to resemble everything you’ve ever seen in horror movies as fans flock to the greatest horror event of all time. Movie screenings, celebrity guests, it's going to have it all. Madman creator Anthony Walsh (Owen Egerton) is even filming a surprise movie at Blood Fest that horror fans will love! Love to die for. “The best part, this shit’s for real.”

In the familiar horror stylings of The Cabin in the Woods, Blood Fest brings out the horror movie clichés and has fun with them. Everything is thrown at the wall and most of it sticks. Paper Mache pig-faced chainsaw killers, vampires, zombies, killer clowns and a Red masked, Darth Maul murderer with a knife on a chain and near Jedi abilities. “If you know the rules, you might make it.” Don’t separate, don’t take your clothes off and don’t lose your virginity.

Uber teen horror fan Dax (Robbie Kay) and his best friends Krill (Jacob Batalon) and Sam (Seychelle Gabriel) must survive an asylum of everything horror. “She’s a virgin, she might stand a chance.” The group teams up with wannabe actress Ashley (Barbara Dunkelman) and her director boyfriend Lenjamin (Nicholas Rutherford). He’s going to direct a Rom-Com and she’s going to be the Rom, if they live... The kids are going to have to become killers if they want to make it out of this arena alive. “This is going to be the best night of my life.”

The comedy is high, the horror is fun and the script is brilliant. This is the second feature film for writer, director and actor Owen Egerton. I enjoyed Blood Fest so much I’d watch him direct anything. “A Tommy Wiseau movie, a driver’s Ed video, I’d watch him direct a commercial with granola and I hate granola.” That's just a little of the dialogue you'll find in this Monster Squad enters the House of 1,000 Corpses arena. Did I even mention the buckets of blood thrown at the screen?

Blood Feast is the 1963 classic from the "Godfather of Gore" Herschell Gordon Lewis. Blood Fest has all of the makings to become the 2018 cult favorite horror comedy from Owen Egerton. “Welcome to Blood Fest motherfuckers.”