Review of "The Mummy Rebirth” by The Headless Critic 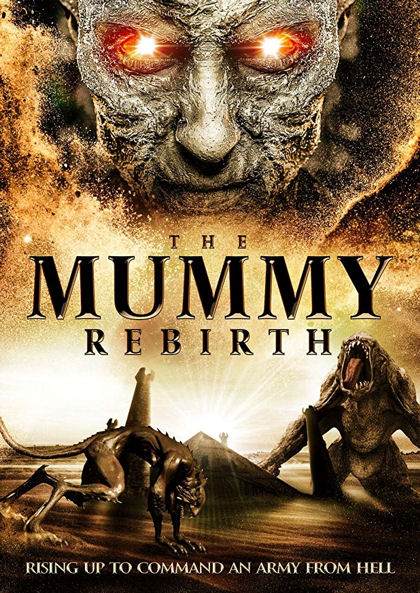 In 240 BC an Egyptian couple are slain, their love affair dying at the end of a sword. In 2019 AD a group of treasure hunters will bring forth their rebirth. When treasure seekers Daniella (Brittany Goodwin) and Carter (Noah) uncover an ancient Egyptian tomb that’s been sealed for centuries, they awaken a Mummy who rises bringing hell on earth. After two thousand years he will avenge his lost love against all humanity.

The latest feature to come from B-Movie making machine Justin Price walks like an Egyptian. This time with co-director and producer Khu, Justin Price gives rebirth to a classic tale with his version of the mummy. Practically done the mummy looks excellent. There are sound issues matching the mummy's voice to it's mouth but the look is still fitting. Its supporting cast of monsters are heavily CGI and done so on a budget. When Price does practical effects like the mummy and in his 2017 feature The Elf I always enjoy it more than his budget animation. An old school horror fan I always prefer practical and tend to be hard on budget CG.

More Brendan Fraser’s 1990’s action, adventure Mummy than Boris Karloff’s 1930’s horror, The Mummy Rebirth has adventurers uncovering hell on earth. I guess The Mummy Regurgitation wouldn’t sell as easily as a rebirth. At least I think it’s safe to say Justin Price didn’t kill off a whole dark universe before it got started like Tom Cruise did in 2017's The Mummy.

Price knows how to make a movie on a mass scale, churning them out like a machine. A familiar story from the 90’s and casting for looks over reality has a Hollywood looking cast needing more character depth, originality and realism. His A to Z filmmaking misses the heart of making movies which is storytelling, characters and performance. Small details like the Halloween store fake spider webs in the caves are also impossible to overlook being so laughably bad in a feature film they’re actually enjoyable.