Review of "The Grudge” by The Headless Critic 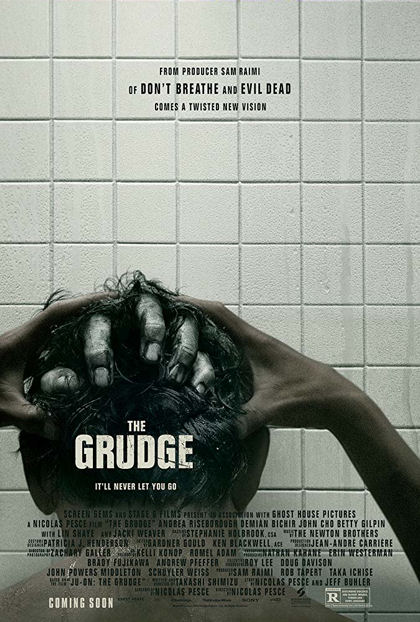 In 2002 an American nurse Fiona Landers (Tara Westwood) came home from Tokyo after an unnerving encounter at the Kayako (Junko Bailey) house. She brought the curse that plagued that house home with her. Four years later Detective Muldoon (Andrea Riseborough) against her partner Detective Goodman’s (Demián Bichir) advice investigates a two year old death that leads her to the Landers home. Once you enter a house with the grudge attached the curse will attach itself to you. Those who enter are connected to the curse, the past, present and future.

In the 2004 Takashi Shimizu remade his popular Japanese film Ju-on for American audiences. In it a nurse named Karen played by Sarah Michelle Gellar encountered a supernatural curse while working in the Kayako house in Tokyo. Follow-up sequels failed to find the success of the original and English remake. In 2009 The Grudge 3 became was the first in the American series of films that didn’t get a wide theatrical release going straight to DVD. Largely negative reviews effectively killed the American series, until now.

Set in four different time periods including 2002, the year of the original Japanese release of Ju-on, 2004, the year of the release of the American remake of The Grudge and 2006 the year of The Grudge 2. An alternate tail of what is probably the same universe as The Grudge 2004 about another nurse named Fiona Landers who in 2002 is spooked after an encounter at the Kyoko House. The same cursed house that Karen (Sarah Michelle Gellar) visited in the 2004 film. Fiona unknowingly takes the curse home with her to Pennsylvania.

The Grudge 2020 also follows four groups of people who stepped into the grudged home. There’s the Landers family who brought the curse back from Japan. There’s the Matheson family Faith (Lin Shaye) and William (Frankie Faison) who bought the home next. There’s the Spencer family Peter (John Cho) and the pregnant Nina (Berry Gilpin) a realtor couple wanting to sell the home. Then there’s detectives Muldoon, Goodman and Wilson (William Sadler) who link the events together. Four years, four groups of people. Besides the opening introduction to each group and the year they are in the film no longer provides guidance to help the audience follow what’s happening as events jump back and forth between time periods.

The most interesting characters in the entire film are suicidal Detective Wilson and his partner Detective Goodman. William Sadler somehow manages to take his little bit of screen time and make a Joker worthy character that wasn’t explored nearly enough. Demián Bichir may make the only likable character in the film and is in my opinion who should have been the focus as a protagonist. He’s definitely the rock of the movie and is largely left a forgotten side character. There’s also a nicely crafted love between The Matheson’s that with all the other timelines and groups of characters isn’t given enough time to get full impact when unfortunate events befall the family.

Peter Spencer setting up as a daylong resident of the Landers home becoming a makeshift babysitter for their daughter Melinda (Zoe Fish) without calling the police or an ambulance when the little girl starts gushing blood is some of the dumbest writing I’ll probably see all year and I say that knowing the year has just begun. Detective Muldoon played by Andrea Riseborough just doesn’t work as a lead character especially when there are a few lead worthy protagonists in the film that go unexplored. The entire length of the film is a build to Detective Muldoon's confrontation with the spirit haunting her only for it to end abruptly when it finally gets interesting.

In 2016 Justin Pesce made one of my favorite films of that year called The Eyes of My Mother. A brilliant first feature that’s creepy, thoughtful and daunting with the perfect filming style for a first time feature filmmaker. At the end of 2019 I made the statement that most theatrically released films that year were okay at worst with very few films being awful. To start off 2020 I’ll be surprised if Joe Pesce’s The Grudge doesn’t make my worst films of the year list. It has the worst editing job I’ve seen since the unfinished film The Snowman. It’s a timeline mess of a movie that doesn’t know how to advance their story, follow their interesting characters and or the brilliance The Grudge created in Japan some eighteen years prior.