Watching Movies - The Eyes of My Mother 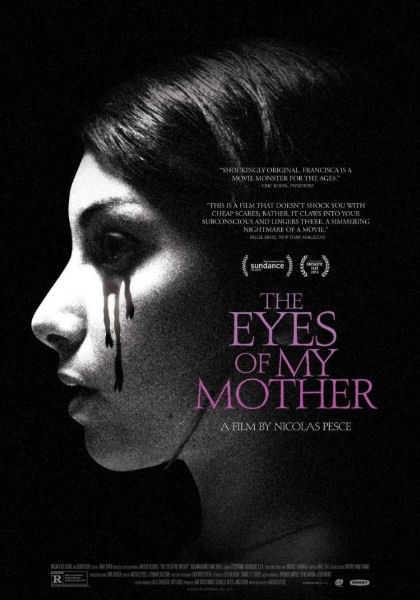 Having learned anatomy through the butchering of animals from her surgeon Mother (Diana Agostini), a young Francisca (Olivia Bond) grows up desensitized to death having learned through The Eyes of Her Mother. When Francisca lets an intruder into their home who violently murders her Mother the child is further traumatized. Francisca’s Father (Paul Novak) captures the man who killed his wife (Will Brill), keeping him captive in the barn. Removed from the world Francisca befriends the only person around, her mother’s killer. She cares for the man in the barn while her Father nonchalantly tortures him for his sin.

As an adult, Francisca (Kika Magalhaes) has stayed under her father’s protective roof her entire life, in a remote existence sheltered from the world. At her father’s passing, the young woman loses what little touch sanity she had. Longing to connect with the outside world, Francisca reaches out to her father’s long time captive and her only friend. When that connection doesn’t last how she wanted it to, a lost Francisca searches for anyone unlucky enough to meet the girl who was made into a murderer through The Eyes of Her Mother.

In his feature film debut Nicolas Pesce displays the psyche of a sociopath better than I’ve seen on film since Alfred Hitchcock’s Psycho. He also tells his story in a similar black and white with a character who has a difficult time letting go of her parents. The movie is Francisca and is largely made by the performance of Kika Magalhaes. Francisca lives by what she learned from her mother and father. When her life is taken from her, she's lost until she recreates it. She slips from the role of a youth uncomfortably into being a mother. For most of us life’s journey is sometimes brutal. Unlike most people, Francisca’s life often ends in murder.

No one wants to see a remake of a classic like Psycho as overrated arthouse director Gus Van Zant proved in his 1998 scene for scene attempt. Nicolas Pesce takes his own look into his own Norman Bates. Which is a much better way to create not recreate what you love. It’s not perfect as something is definitely missing in this film that I could never quite place. I also found the arthouse cinematography as consciously done as the black and white shooting verging on annoyance. Pesce still creates his own cinematic arthouse of horrors. While it may be a love it or hate it film, I absolutely love it. Simple, beautiful, brutal and brilliant.