Review of "Stake Land II" by The Headless Critic 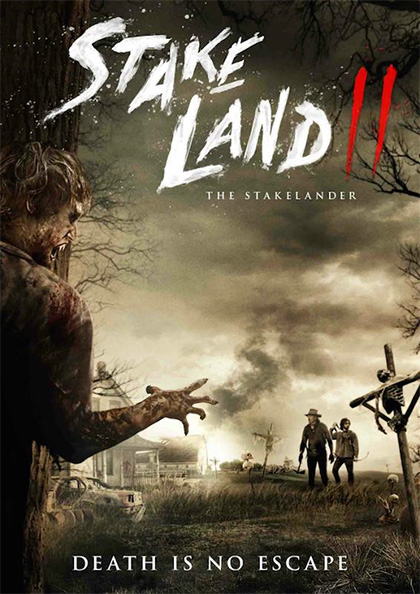 Stakelander picks up 10 years from where the original movie left us. If you haven’t seen 2010’s Stake Land, I recommend watching it before you stake this sequel. The Stake Land series is a nice change from a world of sexy vamps. The series confusingly but successfully mixes vampires with a zombie like, mindless hoard. The world they create is as sad and desperate as the world of the Walking Dead. Though we’re dealing with Vampires, they’re almost zombie like Vampires in Stake Land. A bit confusing but they successfully create a frightful combination into terrifying monsters.

In part two of our story, we’re still following the lives of Martin & Mister in the zombie vampire ridden, dystopian world. The filming style and overall outlook isn’t as bleak as the first film but is still very powerful. The imagery and cinematography in both Stake Lands is by far it’s best, most alluring quality. With both movies you’ll find, good acting, beautiful scenes, great action and a good overall premise for action horror. All done without the big budget waste of movies like Underworld.

The story does get a bit lost in the multiple flashbacks, as they try to catch you up on the last 10 years. Lead actor Connor Paolo is a little unconvincing as Martin the bad ass, 10 years later. Perhaps because in the real world it had only been 6 years since he played the lost teenager of the original. As opposed the the 10 year time lapse in the movies storyline. Mister played by the ever impressive Nick Damici, executed another wonderful performance. I think the film tried to progress Martin’s character too soon while at the same time having Mister go over the hill faster that Murtaugh in Lethal Weapon. This was the time for the inbetween movie, not the reversal of characters.

Nevertheless, we’re left with a solid Stake Land sequel. While I wasn’t a member of the almost cult following Stake Land garnered, I enjoyed the original and highly support this style of filmmaking. While the sequel doesn’t quite live up to the original, this casual Stake Land fan thought it was still good.