Review of "Hunting Grounds" by The Headless Critic

Production by: The October People, Votiv
Distribution by: Uncork'd Entertainment 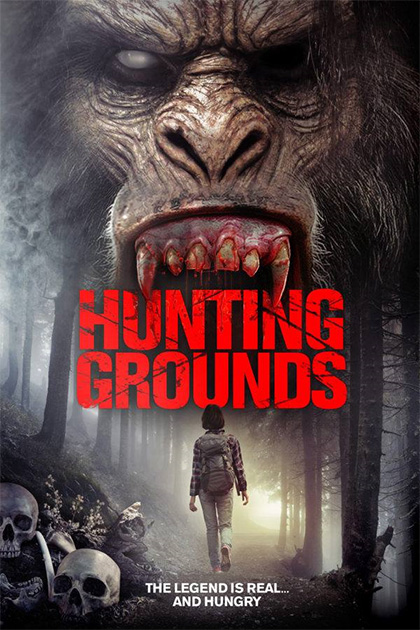 After falling on hard times, a father and his son move to an isolated, family cabin. The duo are joined by two of the father’s friends, as they go deeper into the woods on a weekend hunting trip. Hunters becomes prey as the odd foursome travel to a part of the woods where mankind isn’t on top of the food chain.

I don’t think I’m giving anything away in saying this is a Sasquatch movie. It’s actually the best Big Foot movie this reviewer has seen since Harry and the Hendersons. After that powerful statement, I should also add that more Sasquatch movies could definitely be added to my watchlist.

I enjoyed the slow build of the film. Too many movies burn this opportunity to get viewers invested in their characters. This is the perfect thing for low budget movies to do as it focuses on acting and script as opposed to more costly effects. Unfortunately the weakest part of Hunting Grounds is it’s dialogue.

There were some good performances from the films small cast. The unique Actor Bill Oberst Jr. always delivers. Though I didn’t recognize actors, Miles Joris-Peyrafitte or David Saucedo from previous performances, they both did a good job as well. The role of one of the father’s hunting buddies, played by D’Angelo Midili seemed horribly miscast. Though no fault of the actor himself. I wasn’t feeling Jason Vail’s performance of the father Roger Crew. He also had some of the most unrealistic, fatherly lines to deliver. This type of dialogue is what made the movie hard to watch as times.

The woods setting is shot nicely, giving a genuine feel to the movie. The plot of the film had some holes but nothing so extensive it couldn’t be overlooked. I expected a horribly, animated Big Foot. The most appealing part of Hunting Grounds besides the wooded scenery was actually the Sasquatch. Too often low budget films use poor CGI instead of make-up, special effects or costumes. Leaving modern films looking worse than movies made two decades prior. Hunting Grounds did not fall victim to that common mistake.

The costumes used, were similar to those used in Harry and the Hendersons. Which made this reviewer very happy. The Sasquatch faces seemed to look bad from a distance but even those looked better close up. While not the face I’d have chosen personally, it still looked good.

On paper, Hunting Grounds provides everything I would want from a Big Foot horror film. A simple script with brutal but realistic Sasquatch attacks. Poor dialogue and a limited budget kept this film from being the Big Foot movie I've wanted to see. I do wish I had more Sasquatch movies watched to reference from. This is no Legend of Boggy Creek. It also doesn’t fall victim to bad movie making like Sasquatch Hunters. I’ve heard there’s a few good Big Foot movies in recent years. So far this is the best I’ve seen which doesn’t necessarily say much.