Watching Movies - Curse of the Man Who Sees UFOs

Production by: Not a Plane
Distribution by: Virgil Films and Entertainment 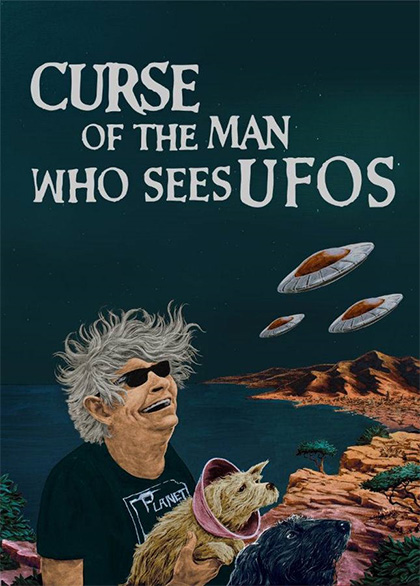 Despite a wonderful title that’s fitting for any independent film or Science Fiction horror movie, Curse of the Man Who Sees UFO’s is instead a documentary of exactly what the title states. While technically this isn’t horror, it does cover a topic of which many horror films have been based. Horror fans should not go into this expecting a terrifying documentary. This documentary won’t give you nightmares. It is a nice exploration into the life and mind of a believer who knows the truth is out there.

At first the film seemed like I was just watching a man, watching the sky and calling out movements no one else could see. I likened this to the many popular ghost hunting television shows that never seem to turn up undeniable evidence of otherworldly existence. I actually got a little annoyed with the films lack of making an argument for or against UFO origins. Then as I watched the man who sees UFO’s stare into the sky, I realized I wasn’t watching a documentary about UFO’s. I was watching a character study of Christo Roppolo and the curse of the man who sees UFO’s.

Documentarian Justin Gaar successful captures the essence of the story that was on his camera. Whether you believe aliens exist or not doesn’t matter and this film won’t prove either. There are unidentified flying objects in the sky, be it man made, nature or something else. This film isn’t an exploration of whether UFO’s are explainable or other worldly. This is documentary of a man’s obsession with the lights in the sky.

Christo Roppolo is a big enough character to hold ones attention long enough to make a movie about him. He’s an eccentric being, who seems to have found a purpose in believing. Filmmaker Justin Gaar saw this man’s potential before he ever began filming. As Andy Warhol once wrote, “In the future, everyone will be world-famous for 15 minutes.” This was an entertaining enough 15 minutes. Gaar took a man who believes in UFO’s and turns him into a movie, in his first attempt at documentary filmmaking. I would look out for what Gaar will do in the future. With titles like this, his films will definitely garner your attention.