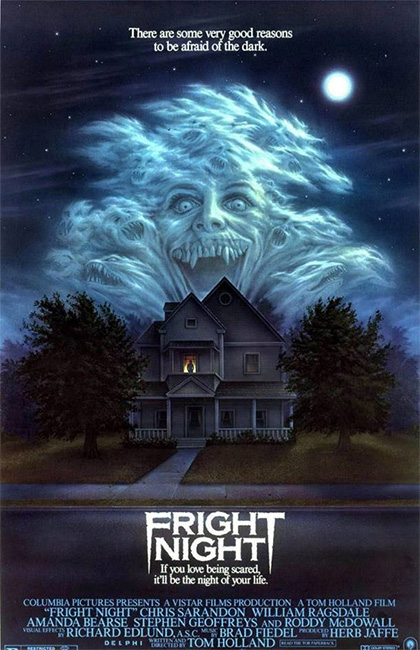 “The Kids today don’t have the patience for vampires. They want to see some mad slasher, running around and chopping heads off.” An excellent explanation of the 1980’s movie scene by Fright Night television host Peter Vincent, played by Roddy McDowell. In an era when Hollywood was mass producing slasher films, this was the campy, 80’s vampire movie.

Fright Night is the epitome of 1980’s horror. It comes complete with all the clichés, teenage sex, bad acting, prop effects, comedy and all topped with the perfect amount of cheese. I tend to not mind movies playing into clichés. I’m only critical of acting if it’s horrendous in a non-comical way. I’m the first one to take a movie down for bad effects. While bad CGI may be this generations version of what a prop bat on a wire was to my generation, I don’t care. Fright Night had the perfect cheese factor to pull this movie off. Horribly animated, dual monsters, take a movie so far out of reality I just can’t enjoy them.

Roddy McDowell was the highlight of this film. His comical, Christopher Lee/Peter Cushing/Vincent Price-esque character, as a vampire slaying, midnight movie host is enjoyable on all levels. He becomes a reluctant, real life vampire hunter on an almost Don Knotts/Three Amigos level. McDowell’s performance leaves you wishing he had his own movie or perhaps an actual Fright Night show to host every week. Our vampire played by Chris Sarandon is played perfectly. So is our horror movie loving lead character Charlie Brewster played by William Ragsdale. Who can't seem to get anyone to believe his neighbor is a vampire. It’s the cast of supporting characters that really give this film it’s flavor. Amanda Bearse plays a perfect girlfriend. Attractive but she still matches our male lead, who's a bit of a horror nerd. Vampire servant Billy Cole played by Jonathan Stark is such a quirky character he really stands out in a smaller role. Stephen Geoffreys performance as best friend Evil Ed is possibly the second best performance to Roddy McDowell. Geoffreys is so stereotypical 80’s comical, he provides a large portion of the movies laughs.

Some younger audiences may not appreciate director Tom Holland's Fright Night as being the perfect cheesy 1980’s horror film it is. I may never appreciate SharktoGator 12. I do appreciate Fright Night for whisking me away like Dorothy Gale in a tornado, to the decade I fell in love with horror movies. I hadn't watched Fright Night in 20 years. I’d forgotten how good it is and I think as an adult I enjoyed it even more. I recommend anyone who hasn't seen it check it out. If you haven't seen it in several years it's time to watch it again. The kids today don’t have the patience for old school horror films. They want to see some zombie around every corner, running around, acting serious with no cheese. I’ll take my cheese. I’ll take my Fright Night.

WYH Q&A Panel with the cast of Fright Night