Watching Movies - The Night Evelyn Came Out of the Grave 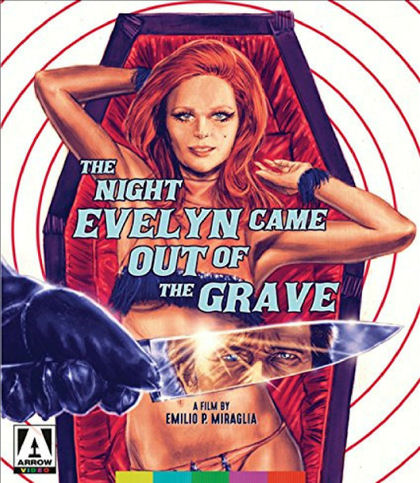 A wealthy pervert, lures women back to his castle so he can have his way with them in the worst way possible. English Lord Alan Cunningham (Anthony Steffen) suffered a mental breakdown following the death of his beloved wife Evelyn. Before her death, Alan believed his lovely red-headed wife was cheating on him. Now Lord Cunningham has taken to local bars and lowly dives, looking to seduce beautiful red-heads into coming home to his castle with him. Those unlucky girls who visit the Cunningham castle are found at his mercy as he tortures and kills the women who remind him of his cheating wife. When Lord Alan meets a woman worthy of leaving alive, he makes her his second wife in hopes of keeping himself from slipping further into insanity. That is until The Night Evelyn Came Out of the Grave.

Italian director Emilio Miraglia only sat in the director’s chair for six films. All within a five year span in the late 60’s and early 70’s. I personally have few genres I dislike more than the Giallo films from this time. Miraglia however, made two of the better ones I’ve seen in The Red Queen Kills Seven Times and The Night Evelyn Came Out of the Grave. Both are enjoyable suspense, mystery, thrillers released at the same time. The Night Evelyn Came Out of the Grave is a highly sexualized story of a serial killers, luring women with his charm. A more sophisticated Ted Bundy. An endless group of beautiful red-heads run around his castle naked as he kills them off one by one. The film has a nice turnaround at the end that’s just as enjoyable. For Italian films of this era, I enjoy the two Miraglia films I’ve watched more than most.

Special Features:
You may have seen this movie play on late night tv numerous times in the 70’s and 80’s. The nostalgia factor alone is enough for fans to buy this Blu-ray. The 2K restoration has it looking like a modern day film and worlds better than your old floor model television. The original Italian and English soundtracks have been remastered for this release. It also includes the original theatrical trailer. Audiences tend to be split on voice over dubbing and subtitles. So one of the best features in the Arrow release is you can watch the movie dubbed into English or the original Italian version with subtitles. The English subtitles have been updated for accuracy.

There’s audio commentary by horror author and Giallo film expert Troy Howarth. An over an hour interview with actress Erika Blanc who plays Susie. She goes into some behind the scenes happenings of the film as well as some interesting things that changed from production to release. Erica also provides an introduction for the movie. There’s an archival interview, The Whip and the Body with her and another with productions designer Lorenzo Baraldi titled, Still Rising from the Graves. There's also a new interview with film critic Stephen Thrower.