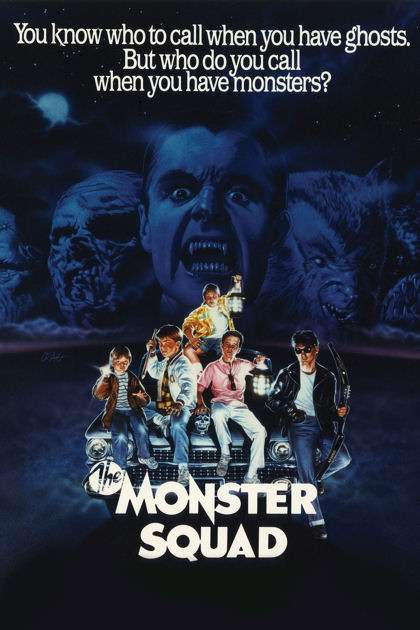 “One hundred years before this story begins it was a time of darkness in Transylvania. A time when Dr. Abraham Van Helsing and a small band of freedom fighters conspired to rid the world of vampires and monsters and to save mankind from the forces of eternal evil... They blew it.”

“I think there are monsters, like real ones!” Count Dracula (Duncan Regehr) has come to town in search of a powerful amulet that can banish him to an eternity in limbo. Dracula calls upon the most classic of Universal Monsters to help him. The Wolfman (Carl Thibault), Mummy (Michael Reid MacKay), Gillman (Tom Woodruff Jr.) and Frankenstein’s Monster (Tom Noonan) are all brought in as back-up. “Know any virgins?” we’re going to need them. The only thing standing in Dracula’s way is a Scary German Guy (Leonardo Cimino) and group of monster movie loving children who are considered losers by their classmates. They call themselves The Monster Squad and they must put everything they’ve learned from movies to use as they battle television’s most legendary monsters. “If we pull this off, I'm gonna shit!”

For Children of the 80’s who grew up 50 years after the fact, the Universal Monsters where ingrained into society. The concept of Monster Squad is so simple, yet perfectly brilliant. Every child of the 80’s who thought Stephen King Rules, wanted to battle the monsters of the day. For once Hollywood gave kids exactly what they wanted. The Monster Squad is a short story fantasy, written out by an elementary school kid where them and their friends save the day as monsters attacked their town. Only this time, it wasn’t written by a child in a classroom. It’s written by one of Hollywood’s most entertaining screenwriters Shane Black and it’s played out on the big screen, instead of just being read in front of their classroom.

Made for children, The Monster Squad isn’t the most refined film. It does do two things perfect though. It’s gave their target audience exactly what they wanted and it has wonderful dialogue. There are so many memorable line in the film. Some of them quoted in this review. Re-watching The Monster Squad was a nostalgic trip but I stand by it as an enjoyable film that will still entertain adults and their kids today. It’s the movie where we finally find out that, “Wolfman’s got nards!”


WYH Interview with Carl Thibault "Wolfman" in The Monster Squad