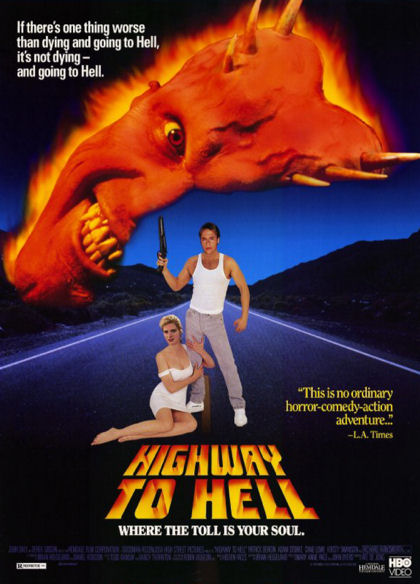 “If there’s one thing worse than dying and going to Hell, it’s not dying and going to hell” which is exactly what happens to Charlie Sykes (Chad Lowe) and his fiancée Rachel (Kristy Swanson). The underage, runaway couple take the backroads to Vegas to avoid the cops on their way to elope. That decision could cost them their lives. Fueling up at “Sam’s Last Chance” gas station, Sam (Richard Farnsworth) forewarns the couple of the dangers ahead. Living on love, in teenage bliss, the couple doesn’t heed the old man’s warnings. “The cops on this road don't take you to jail... They take you to HELL.” To get his fiancée back Charlie must go through the gates of hell “where the toll is your soul.”

I watched and mostly forgot Highway to Hell sometime after 1991 when it arrived on VHS to my local video store. I’m very glad I got to re-watch it. It’s an excellent horror concept done in a comical way that was mostly lost on my younger self. The cast alone includes a young Chad Lowe, Kristy Swanson, legendary actor Richard Farnsworth, Jason Voorhees himself C.J. Graham and Runaway Lita Ford. Gilbert Gotfried has an hilarious role as Hitler in Hell. That alone is worth checking the movie out for. A young Ben Stiller serves up a little “headcheese omelette” in dual roles in the film. Ben’s dad and Seinfeld vet, Jerry Stiller plays a dead cop in Hell. Just excellent casting of out of place actors, pulling it off in unfamiliar roles. There's a lot of enjoyable practical effects in the nearly pre-CG era film. I really enjoyed the floppy tit, fight between Charlie and the nude Demon Rachel (Michael Reid MacKay), who he once thought was his girlfriend. The Nunzio’s Pizzeria triangular sign is some early 90’s nostalgia worth mentioning as well.

There were many other subtle nuances I just wouldn’t have picked up on as a kid. There’s a Rocky Horror nod, with their Satanic Mechanic. Of course the mechanic was sent by AAA, which stands for “Anarchy Armageddon Annihilation” in Hell. I believe I could watch the film again and pick up even more little hidden hilarity. That hidden depth shouldn’t be a surprise with writer Brian Helgeland who also wrote A Nightmare on Elm Street: Dream Warriors and would go on to write L.A. Confidential, A Knight’s Tale, Mystic River, Man on Fire and many more films. I believe he has good material to work with if he ever decides to do a Hellcop (C.J. Graham) spinoff sequel. If you missed Highway to Hell, I recommend this horror, comedy. If you were younger and didn’t think much of it, it’s definitely worth the another watch.

WYH Interview with Michael Reid MacKay of Highway to Hell