Review of "Tsunambee" by The Headless Critic 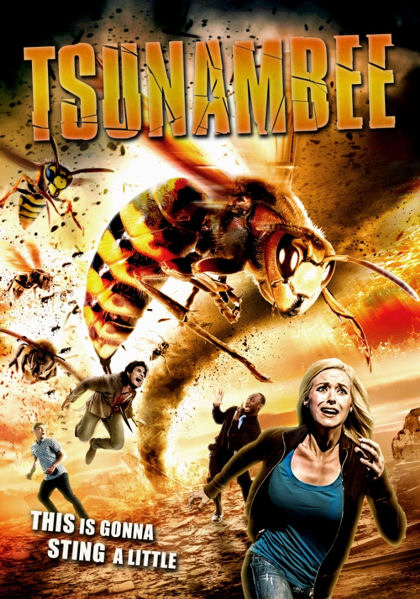 “This is gonna sting a little”. Los Angeles is thrown into chaos as what might be the end of times wreaks havoc on the world. A group of unlikely survivors from different backgrounds band together, trying to survive. The ragtag group must put their differences aside when they’re threatened by a tsunami swarm of giant bees on top of the already pending apocalypse.

“Are you guys talking about the big bees?” No we’re talking about Tsunambees! Gifted with the excellent title, Tsunambee includes all the aspects you’d find in a Syfy original film. Bad acting, cliché dialogue, poor cinematography and awful CG, create that well rounded mix that some people love so well. I will give them this, Tsunambee tried to break out of the bad, CG monster movie mold. They put an emphasis on different cultures and a religious take on the end of the world. The different cultures were very stereotypical though. It was nice to see a film with religious aspects while not being a strict religious movie. Much of the religion was glazed over, simplistic and a misguided representation. I feel if this movie had actually been a Syfy production, it would have been titled Zombees. Much like a Sharktopus, Tsunambee combined giant bees and zombies, bringing back the stung that died. I guess there’s still time for Syfy to pick it up.

This is a film for the loyal fanbase of Syfy original movies, which I am not a member of. I did enjoy the brief instances of beevision. Though the CG was bad, I’ve seen worse and it surprisingly didn’t ruin the film for me. Tsunambees has the worst Sarah Connor, ran out of a budget, fake false finish ever. Much like the people stung by bees in this movie, it just wouldn’t die. I thought they were going to play the sequel right after watching this feature. Just die already!