Review of "Hank Boyd is Dead" by The Headless Critic

Production by: Cat in a Bag Productions
Distribution by: Terror Films 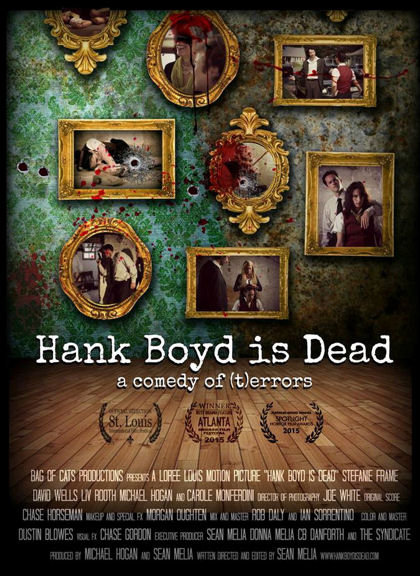 A caterer Sarah Walsh (Stefanie E. Frame) enters the home of Hank Boyd, reluctantly serving his wake. Hank Boyd was a quiet man Sarah had went to high school with. He stood accused of horrific crimes, taking his own life before he could stand trial. Though Hank was a strange kid, Sarah never believed he could be guilty of such crimes. Her instinct of his innocence only grows stronger as she serves his family. His brother David (David Christopher Wells) is a local cop with a checkered past. Hank’s sister Aubrey (Liv Rooth) is more withdrawn and quiet than Hank was in high school. Their mother Beverly (Carole Monferdini) is a socialite has a touch of out of touch crazy. Sarah soon finds herself held hostage by her job, then the family itself. Family secrets are revealed as Sarah fights for her freedom and her life.

Hank Boyd is Dead is an interesting film. It calls itself, “A comedy of terrors” but not having read that before watching the film it was a third of the way through it before I realized this wasn’t just a normal thriller. It wasn’t a complete spoof though. It felt more like Will Ferrell’s Lifetime movie A Deadly Adoption, where you’re waiting for the punchline the whole film. You’re expecting a spoof and it plays out mostly like the lifetime movie you’d normally expect.

Hank Boyd is Dead is a partial pretend documentary, with small documentary segments interrupting as the movie plays out. Think of 2009’s The Fourth Kind for reference. Though The Fourth Kind pulled off the realistic aspect of their documentary better. Interruptions aside, there is a very interesting story that plays out on screen. The Boyd family is messed up but For his first time feature, writer/director Sean Melia didn’t quite capture the shock value intended. The camerawork in the film is better than most but still has noticeable room for improvement. The score was awkward. I don’t want to say it didn’t work because I’m not sure what to make of it. It did stand out though. The acting in the film isn’t horrible and I’d hate to blame poor performances on the actors. Melia had a good script and story to tell but his dialogue was a bit unrealistic.

I have mixed reviews on this one as it’s a film that doesn’t fit into the movie standard. It’s a good story to tell but poor dialogue to tell it. I like some of the turns the movie takes. It’s mostly looks professionally filmed but at times there are odd shots from a camera out of place. The comedy, horror intentions were missed on me. Not a bad first outing, I want to say you’re halfway there.