Review of "A Beginners Guide to Snuff"
by The Headless Critic 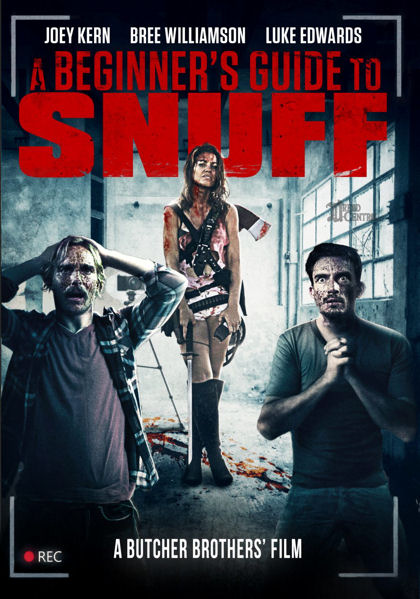 Don’t let the title fool you, this is not a documentary. It is however, a black comedy, horror film from the Butcher Brothers. The Winters brothers Dresden (Joey Kern) and Dominic (Luke Edwards) are down on their luck wannabees with Hollywood stars in their eyes. On their last legs the Winters brothers are one wrong turn away from having to move back to their hometown in Minnesota. In a last effort to survive in L.A., the brothers decide to make a snuff film. Making money from a snuff film when you have little money to fund it proves more difficult than they thought. When they can’t find an actress on a budget good enough to make a believable snuff film, the brothers decide to legitimately kidnap an actress (Bree Williamson). These aspiring filmmakers kidnapped a killer actress and get more realism than they wanted.

The Butcher Brothers proved themselves adequate indie horror filmmakers with The Hamiltons, The Thompsons and The Violent Kind. A Beginners Guide to Snuff takes a different approach than their previous films, venturing into black comedy. I love the concept. Sleazy filmmakers decide their casting couch doesn’t have enough talent for a snuff film, so they kidnap the actress to get a realistic performance. Then the tables are turned as we switch to a revenge film. The script is good; the execution left something to be desired. Bree Williamson’s lead female role as our kidnapped actress wasn’t quite believable enough as she makes to turn to revenge plot. I see now, why our filmmakers kidnapped her instead of casting her. Joey Kern makes a better stoner but his performance as a failing filmmaker is good. Luke Edwards definitely steals the show as the weasely brother. I enjoy the turn the film takes but parts do fall flat. The suck it or chop it scene alone make the film worth a view. If you want to know what that is, go watch the movie. A really good performance by Edwards. You won’t be disappointed.