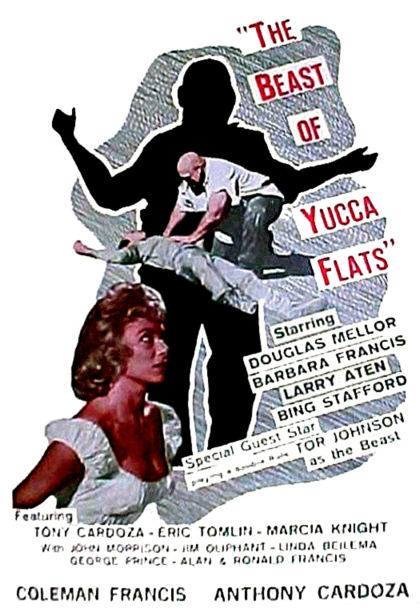 A Russian rocket scientist Joseph Javorsky (Tor Johnson), is defecting from the USSR and he’s bringing pictures of the secret first moon landing with him. The Russians send assassins after Javorsky. Unable to catch him, they chase the defector into the atomic bomb testing zone of Yucca Flats, where he’ll surely meet his death. Javorsky is caught in an atomic blast but instead of dying he’s turned from a brilliant scientist to a Neanderthal brute. Javorsky roams the desert, strangling hapless bystanders who wonder through the atomic testing zone, earning himself the name of the Beast of Yucca Flats.

Yucca Flats opens with the slowest, most relaxing, strangulation death in film history. Any effort at a worthwhile performance is neither attempted nor met. To the best of my knowledge, the strangulation scene has nothing to do with the rest of the movie. It is similar to the shower scene in Psycho, which just so happened to have been released the year prior. From there we get Twilight Zone narration that comes seemingly out of nowhere. This narration continues throughout the film. Not only is this a story told through narration, it’s technically a silent film that’s completely narrated or voiced over. As I said before, Psycho was released the year before. This isn’t a film made in the 1930’s in need of voiceover narration. It reminds me of the later works of Steven Seagal, where they seem to film a bunch of action scenes then go back and try to tell a story through voiceover.

I didn’t know when I viewed it that I was watching a film that’s notoriously one of the worst movies ever made. I will say that I came to that conclusion blindly on my own. I’m baffled how the films director was aloud to make two more movies after this. The only bright spots of the film for me is one, it's runtime is less than an hour. It was also nice to see Tor Johnson in a movie as well. He was before my time, but I know of him from the role of Tor played by wrestler George “the Animal” Steele in Tim Burton’s Ed Wood. Speaking of Ed Wood, the only person I’d ever recommend watch The Beasts of Yucca Flats would be fans of the works of the real Ed Wood.