Watching Movies - Night of Something Strange

Review of "Night of Something Strange"
by The Headless Critic 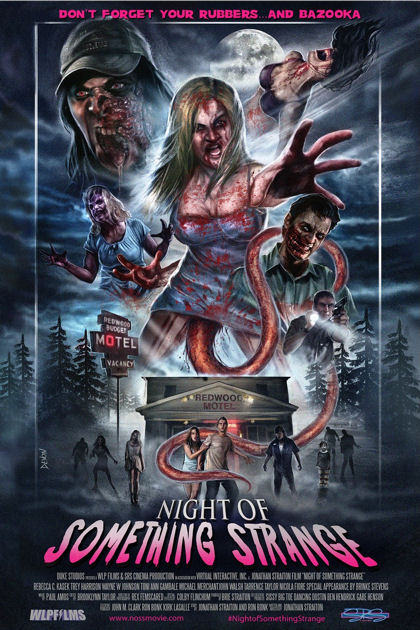 With good name like Night of Something Strange and an even more promising poster, a movie about sex craved zombies was destined for success. The movie opens with a little necrophilia as a janitor contracts a zombie STD on the gurney. The disease slowly turns him into a sex crazed zombie who passes the STD along to everyone he rapes. They in turn pass it along to everyone they rape and you get the gist of the film. Five teenagers headed for the beach, get detoured to an isolated motel where the zombie STD virus is now running rampant. The teenagers must control their unstoppable sexual urges while trying to stop the almost as nearly unstoppable zombies.

I generally found the It Follows concept of a sexually transmitted ghost to be laughable to the point of not being able to take the movie seriously. The similar concept of a zombie STD is far more plausible and works better within the confines of the comedic tone of this film. Make no doubt about it, this isn’t a black comedy. It’s more of a spoof of zombie films and teenagers. I will give them this, they used realistic looking teenagers in their cast. Something most horror films don’t do.

Though I liked the concept, the story is bad. It goes for shock value instead of substance. The dialogue has a few funny liners, but that’s out of a script full of one liners that mostly fall flat on comedic value and do little to invest you in any character or the story. Though the cast didn’t have much to work with, the acting is still mostly bad. The ultra low budget movie went for mostly practical effects, with minor CG mixed in. This mostly looked okay but the simplest part, the zombie prosthetics was the worst. I’m generally not a fan of spoofs and this one was a collection of oversexed scenes, bodily functions and sex jokes. If I hadn’t looked the movie up after, I would have thought it was made by a fifteen year old boy. If penises, bloody tampons, used condoms, ass squirting and accidental and intentional rape make you laugh with almost no context or story, then you might like this film. For me, it tried so hard for shock value, it lost the basics that would hold the movie together. I did like how they had to shoot the zombies in the dick brain to get them to die.