Review of "Alien Reign of Man" by The Headless Critic 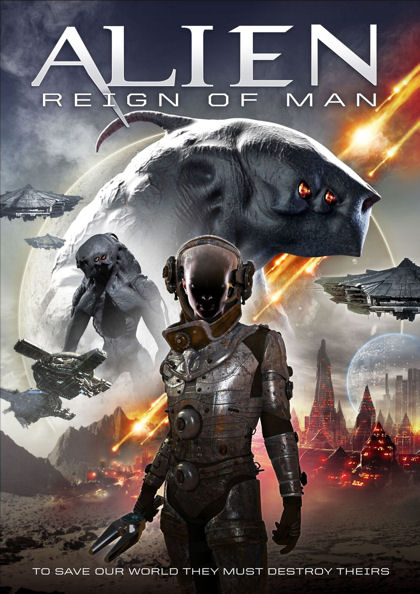 A team of interstellar astronauts are on a mission to trigger a device which will save Earth from its deterioration into inhabitability. The distant planet they’re stranded on is the home of deadly aliens that stand in the way of a successful mission. Can the deep space heroes save Earth before its annihilation or are the natives of the planet too deadly to be stopped?

The number one rule of low budget filmmaking is to be script and acting based and to stay away from special effects. Alien Reign of Man has a lot of script packed into less than an hour and a half feature and it relies on its performances. It also seems to have solely been made to see what kind of computer effects the creators could make. While it does look like time was put into making the special effects as good as possible, it’s still a movie that needed a bigger budget if you were going to rely so much on CG.

Everything about Alien Reign of Man is slow paced, dialogue and CGI based. We’re thrown into the middle of a movie that seems to have its own language and backstory we’re expected to understand. It’s similar to the setup of Battlefield Earth if it was made on a budget that restricted its graphics and action scenes. I’m a huge advocate for story based movies with dialogue master Quentin Tarantino being one of my most respected directors. I don’t know that I’ve ever said this about a film but this movie has too much dialogue. The dialogue isn’t easily followed either. I pick on a lot of films for making their actions scenes too fast with shaky cam filming as well. It turns out slow motion action doesn’t work either. Even the credits run agonizingly slow in this one.

Director Justin Price has four films in the fire so far for 2017. I must admit this is the first film of his I’ve ever seen or heard of. From the one film I’ve viewed I’d suggest slowing down and focusing on quality over quantity in future filmmaking. The CG quality is a little too high and the pace far to slow to even please Syfy original fans.