Review of "Wish Upon" by Jason Minton 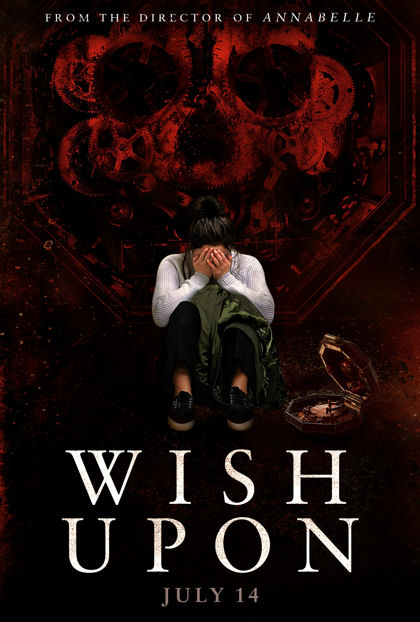 A genie in a box, where seven wishes are granted but for each wish someone must die. Tormented teen Clare (Joey King) watched her mother hang herself when she was just a little girl. Since then it has been a struggle for Clare and her father (Ryan Philippe), who’s known around town as the garbage man, scavenging through dumpsters to make a living. Poor teen Clare is bullied at school by the popular kids, often times becoming the butt of the joke for her entire class to laugh at. Her life changes when her father scavenges an ancient Chinese wish box for her birthday. Unsure if the box really works, Clare wishes her life into a better place not realizing with each wish granted, someone she knows dies. One thing’s for sure, “Be careful what you wish for.”

A familiar story, I feel like I’ve watch similar movies at least three times before. A concept mirroring 2012’s The Possession and last year’s Devil’s Domain, the film felt more like a mix of Final Destination meets Annabelle. Director John Leonetti is the man who directed Annabelle, so it makes sense that the movies feel the same. I have no issues with a wish box concept of a movie. I enjoyed the conjuring movies but wasn’t the biggest Annabelle fan. Wish Upon suffers the same fate as Annabelle. It’s a very Hollywood movie. The characters lack depth enough to be realistic or make me care about them. Several major points in the character lives are glossed over. I realize you have to keep the movie flowing but with a ninety minute runtime, you could have fixed a few of these problems.

Simply put, it’s a Hollywood studio making money and a director doing his job. There’s no passion for the story that’s being told. Passion is found mostly on the independent movie scene. Production values and filmmaking knowhow is found at this studio level. It’s too bad the two don’t mix more often than they do.

Wish Upon is a fine horror by numbers studio film. They get some Final Destination suspense built up for their deaths. Anticipation of the death scenes will make you cringe. It’s not a bad film, I’ve just seen similar movies so many times before. The production values are there in every aspect. The acting was good but with such surface level, stereotypical characters, Shannon Purser’s portrayal of best friend June was the only role that felt real. For fans of movies like Annabelle you’ll probably enjoy Wish Upon. For me and a lot of fans it’ll be enjoyable while watching even if it is a little frustrating. Like so many movies before it, it doesn’t have the heart behind it to stand out as anything memorable.