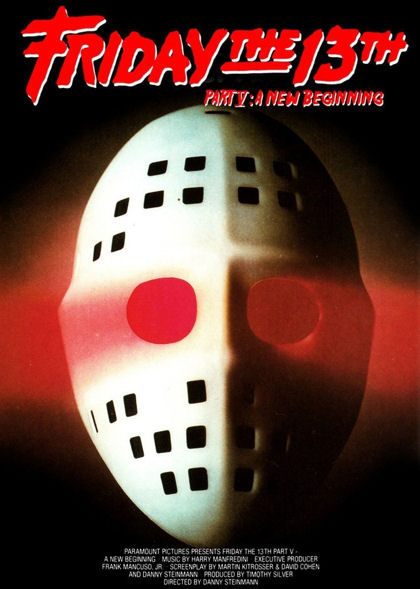 “If the memory of Jason still haunts you, you’re not alone.” "The mindless, the murderous fury that was buried with Jason has been reborn.” As a child Tommy Jarvis killed notorious serial killer Jason Voorhees. Now a teenager, Tommy finds himself in a halfway house for troubled youths. “Severe trauma at age twelve. Brutal self-defense murder of a psychopathic killer. They’ve given him every therapy and treatment they can think of. It’s a wonder his mind isn’t fried from all the drugs.” With a series of brutal murders happening around him, Tommy’s sanity is brought into question. Is he a copycat killer or has Jason Voorhees risen from the grave?

“Terror is reborn” in the fifth installment of the Friday the 13th franchise. It’s the follow up movie to the death of Jason Voorhees. After painting themselves into a corner with Jason’s death, the writers come up with a creative story to bring the franchise back to life. A New Beginning is largely considered the Halloween 3 or black sheep of the franchise. At least when it’s set on earth. I always enjoyed the man behind the mask of the fifth installment, even given its Scooby-Doo reveal. Though it was simply done, it was also a creative way to keep the series going. At the end of the film I thought for sure part six would be Tommy Jarvis taking up the Jason Voorhees mask and perhaps name.

The reason I’m not a bigger fan of the fifth part of my favorite 80’s slasher franchise has nothing to do with an ambulance driver. A New Beginning follows what in my opinion were the two best Friday the 13th movies and the only four good films. Every fan wanted and even expected to see a young Corey Feldman battle Jason Voorhees one more time. Instead the production didn’t wait for Corey’s schedule to clear and be more than a cameo, insisting on a fifth movie in six years. They could have at least given us Corey Haim. Jokes aside, I actually like the story they came up with considering. The replacement kid Reggie (Shavar Ross) was also one of the best parts of the film.

All of the Friday the 13th movies are a bit campy on varying levels. A New Beginning is the first Friday the 13th that was more camp than it was kills. Though the film was forced to be cut from its original version, one thing it does provide are memorable kills. While there is some bad acting and campiness runs rampant, the real killer here are the Hubbard’s. The backwoods, hillbilly family of New Jersey were too over the top stupid to provide any comical relief. They’re a large portion of the reason I didn’t like it as much as the previous four films. It still isn’t the worst in the franchise. After the first four movies, it’s a rough downhill slide into hockey mask horror.