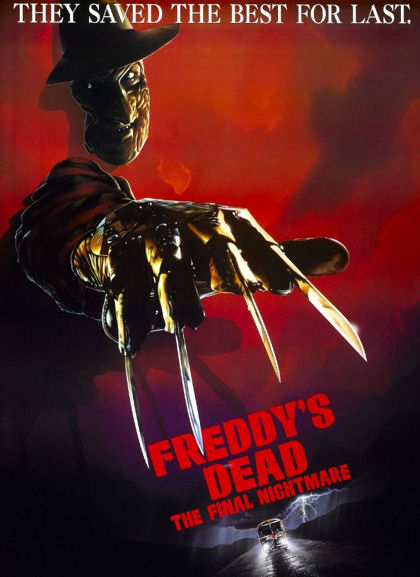 The Final Nightmare is upon us. Before we wake from this seven year terror, we just have to survive one more nightmare. “The saved the best for last.” They man of your dreams is back. After finally finishing off all of the children in his hometown, Freddy Krueger (Robert Englund) is expanding the death range of his dreams. He finds his long lost daughter Maggie (Lisa Zane) to help him on his quest. When Maggie learns what her father really is, the two Kruegers face off in a hellish family feud. “Evil has finally met its match!”

The last surviving child of Springwood ends up in a shelter for troubled teens. A new group of teenagers is brought in for Freddy to slice apart including his never before mentioned daughter Maggie. It’s the most star studded class so far to grace a Nightmare movie. Breckin Meyer who plays Spencer, would go on to become the most famous celebrity Freddy sliced apart since Johnny Depp in the original. Roseanne and Tom Arnold also make a cameo but unfortunately without the brutal ending everyone wants to see. Each teenager comes with their own theme. A trend that was started in Dream Warriors. A gamer, a martial artist and a deaf kid band together with the spawn of evil to bury the burnt up dream monster. It turns out Freddy’s game. The few deaths given include memorable scenes of Freddy entering a video game and a kid with super sensitive hearing being tortured by a pin drop and knives on a chalkboard. The real movie magic is Robert Englund. I do prefer his scary Freddy more but the over-the-top one liners and ridiculousness that happens in this film a thing of beauty as we get all out Freddy Krueger for an entire feature.

Freddy’s Dead is perhaps the most hated of the first six Nightmare movies. This Freddy is the reason many people remember the series as comically as the do. There’s so much cheesiness and one liners, it’s almost a spoof of A Nightmare on Elm Street movie. Director Rachel Talalay would go on to direct the film version of Tank Girl so the comedy shouldn't be so shocking. Even I disliked part six when it was originally released. It wasn’t until re-watching the series years later and now again for this review that I found an appreciation for the comedy value in Freddy’s Dead. Sure I don’t agree with how far the series fell from the original, terrifying, Wes Craven classic. For what it is, A Nightmare on Elm Street 6 is laughably, enjoyable cheesiness, fitting of being shown in Freddivision.