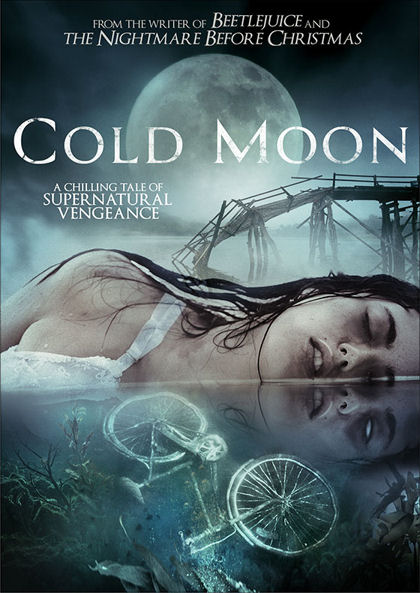 In 1989, the murder of a teenage girl shocks the sleepy, little, southern Florida town of Babylon. The local Sheriff must investigate a murder in a town where people aren’t killed. Family class in small town life is questioned as the wealthy Redfield family is accused of the death of the working class Larkin’s daughter. As the family mourns, seeking vengeance for their daughter’s death, the Sheriff investigates the mystery. The killer of Margaret Larkin (Sara Catherine Bellamy) is haunted by a supernatural horror that was awakened in the Styx River with the death of the little girl. “The Larkin’s are very nice people until you kill them.”

Cold Moon is director Griff Furst’s movie adaptation of celebrated horror writer Michael McDowell’s novel Cold Moon Over Babylon. McDowell is not only a novelist, having also co-wrote feature films Beetlejuice and A Nightmare Before Christmas. Director Furst is a notable actor who’s directed several tv movies often times found on the Syfy channel. There’s been some buzz about Cold Moon which earned more than your typical million dollar budget for horror fair. A bigger budget brings a better cast which includes legendary actor Christopher Lloyd as the Redfield family father. Kid in the Hall Frank Whaley plays Sheriff Hale and there’s a very special appearance by Tommy Wiseau of The Room fame. Josh Stewart who’s been in many theatrical releases including The Dark Knight Rises, Interstellar and The Collection takes center stage as our lead with the most compelling performance.

All of these accolades comprise a film that for me was a note off or what felt normal. I enjoyed the story of murders in a small town. The death of little girls is the most brutal, realistic and best part of a story that covers stalking, murder, hauntings and other supernatural events. Stewart’s downward spiral performance as a tormented murderer shines above the rest. The unrealistic, supernatural elements of the film lost my interest. Poorly executed CGI didn’t help, as it’s one of my biggest pet peeves in cinema. The hype behind it may not live up to expectations but it's still nice to see Christopher Lloyd, Frank Whaley and even Tommy Wi getting some cameo work.