Review of "Mother!" by Jason Minton 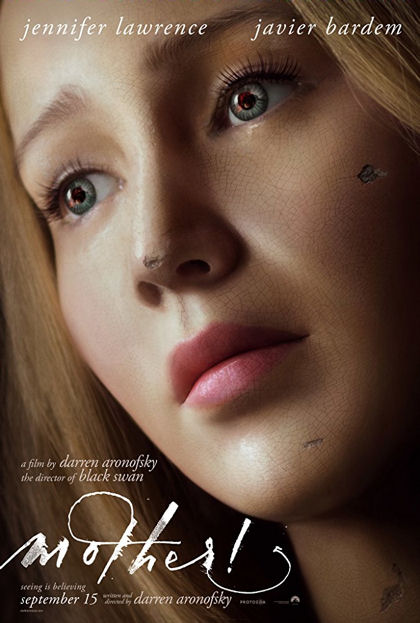 A couple’s isolated existence is forever changed when uninvited guests knock at their door. The couple’s peaceful being is disrupted and their very life is put into question. As their guests begin destroying their beautiful home, a rift between the two grows larger. Can the outside world tear this pair apart or is the couple’s bond strong enough to last an eternity?

Written and directed by Darren Aronofsky, whose fans will list his renowned works directing critically acclaimed films such as Pi, Requiem for a Dream, The Fountain, The Wrestler and Black Swan. I’ll list his failure of directing the godawful Noah which was his last full length film. Comprised with Mother, that's his full body of feature films. Of what I’ve seen of his works, I’ve really liked some, thought other were overrated and walked out of the theater on his last venture. I normally avoid spoilers when possible. In order to inform viewers of what they’ll be spending their money on with this film, spoilers will be necessary. Fair warning, spoilers are ahead but you need to hear them.

Mother! has been marketed as a thriller, possibly even a horror film. Setting the record straight, it’s an hour long mystery/thriller that evolves into just being a mystery. I understand to sell tickets Hollywood doesn’t believe they can market a religious movie. That’s the reason for the recent uproar of faith based films being made outside of Hollywood. I wouldn’t compare Mother! to the church lead, faith based movies you occasionally see in theaters. The mystery to be solved in Mother!, is largely left open to interpretation much like the bible. I do not claim to be a religious expert by any means. I know many religions come of similar origins. This story could be based on any of them or none of them. This however is my interpretation of the movie.

The characters in the film mostly go unnamed. Him/The Creator/The Poet/Father or in my interpretation, God is played by Javier Bardem. He expertly plays a man of power and mystery who’s residing in the isolated house he grew up in. The house represents the earth, making an environmental statement as man destroys it. Bardem’s character is portrayed as a man with writer’s block in the film but the book he’s writing ends up being of biblical proportions. He lives alone in the house with Her/Mother played by Jennifer Lawrence. Mother is seemingly a representation of all things motherly and possibly religion itself. She’s mother earth, who’s slightly OCD in rebuilding the burnt down childhood home for Him. She’s the mother of the son of God, giving birth to his child. She’s also madly in love to the point of worshiping Him.

The first character seen besides God and Mother is Man, played by Ed Harris. He’s soon joined by his wife Woman, played by Michelle Pfeifer. They are a representation of Adam and Eve. They’re continual disrespect of the house/earth causes friction between the couple Him/God and Her/Mother. The sons of Man and Woman who also go unnamed arrive later with one killing the other during a heated argument much like Cain killed Abel. The blood of that death forever stains the house/earth. Though Mother wants to keep all of the people out who come to the door after this, God opens the floodgates continually giving mankind a chance, inviting them into his home.

The couple reconciles and Mother gets pregnant. She knows she’s knocked up the morning after she tells God “you can’t even fuck me” and he proves her wrong. This pregnancy breaks God’s writer’s block. He finishes his work, the bible. His publicist Herald (Kristen Wiig) represents man making money off God as she promotes his work for her own benefit. His faithful follower Zealot (Scott McHattie), seems to represent those who actually believe. He may be misguided as he gets God's work out there as well. Him garners a following like never before. God neglects the pregnant Mother once again as he basks in the glory mankind gives him. People flood into their home, disrespecting and even wrecking it. The separation between Him and Her grows stronger than ever, culminating with the birth of their son.

To save them from Mankind, Him locks the three of them away from the rest of the house into their room as Mother gives birth. God wants to share the glory of his only child with his followers. Mother protects her newborn son from mankind, who’s wrecking Her house below. Taking his child from it's Mother’s tit while she's sleeping, God gives his only son to his followers. His followers praise the child but end up killing the newborn as they fight over it. Distraught, Mother seeks vengeance on those who have forsaken the Father and murdered their child. By the time Mother reaches her son, they’re consuming the body of Christ, literally. Having given up on everything except perhaps God, Mother burns the entire house/earth down which is where the movie started with it's opening scene.

God takes Mother's body from the ashes of the burnt down house/earth. Not wanting to exist without someone loving him, God removes Mother's glass heart, using it to restart life from the beginning. Even as Mother begs him to let her die. In her new form Mother arises to repeat everything we've just witnessed over again. That’s my summary of Mother!, wrapped up almost as small as summarizing the entire world into one house. If you’ve seen the trailer and cannot believe this movie is biblical, watch it and develop your own interpretation.

Besides the story, the filmmaking looks excellent and the names in the cast should be enough representation for how well the acting is. I will say that while Hollywood gives Jennifer Lawrence awards and audiences seem to have fallen in love with her, I consider her the most overrated actress in cinema. Her only good roles have come as emotionally stunted characters because she’s struggled showing any signs of realistic emotions in her films. She has gotten better over the years with this being her most accurate emotional performance. Her character is the center of the movie. I know Aronofsky wanted to create a sense of not knowing what is going on during the film but her character is so removed from the world around her, it also removes the audience from caring. For the first hour it’s an enthralling story. You’re not sure what’s going on but expect it to turn into horror story. I joined Mother in her OCD attempts to save her house, feeling her frustrations. Following a character who doesn't know what's going on leads you too far removed from the story and you eventually just stop caring. When she announces she’s pregnant the night after conceiving I wanted to leave the theater.

I enjoy the concept of alternate religious takes, instead of a straight forward, spoon fed story. The execution in Mother! is just awful. I understand Paramount throwing a thirty million dollar budget at a director who's made so many critically acclaimed movies. Once you've put thirty million dollars into a film, you have to push it out to theaters and try to recoup your investment. Paramount marketed Mother! as a horror film, releasing it a week after the highly anticipated IT in hopes of catching the leftover audience who wanted more horror. All of these were wise decisions, just not honest ones. Well it's my job as a movie critic to tell you not to waste your money on this godawful film.

Usually I'll say there's an audience for all films, even if I don't like it personally. If Mother! has an audience, it has to be the pretentious class of people who find entertainment from smart creations, even if they're presented in the a horrible manner. It's two religious fails in a row for Aronofsky. I didn't finish Noah, and I would have walked out of Mother! if not for the sake of this review. If you still decide to watch this, you might need to take my cliffs notes here. I'm sure I made it sound far more entertaining than it is. If another Aronofsky religious movie is funded, I won't be in the audience to tell you not to go.