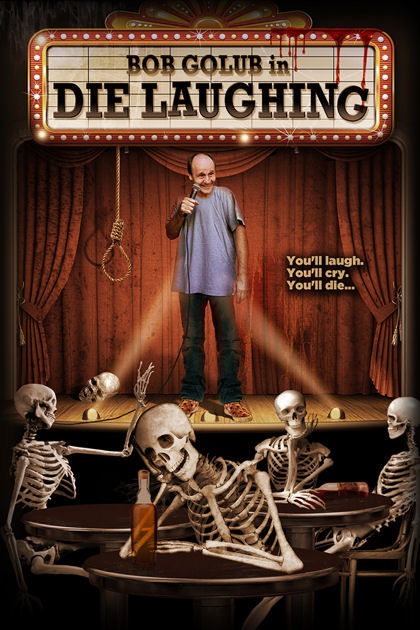 On May 23rd, 2015, a filmmaker placed an ad on Craiglist looking for people who’ve committed homicide for his "Documentary of Death". Comedian Bob Golub answered the ad. Promised anonymity, Golub explains how a comedians life on the road is the perfect setting to get away with murder. As Golub’s life is captured on camera for the documentary, the filmmaker is unwittingly caught up in Golub’s next homicide. This is no laughing matter. Comedian and serial killer Bob Golub ensues on a murdering spree that’s all caught on film. “You’ll laugh, you’ll cry, you’ll die.”

Real life comedian Bob Golub writes, directs and stars in some of the best use of first person, found footage film I’ve seen since the Blair Witch Project. The comedian’s real life is mixed with murder in the making of a movie. Die Laughing is a biographical horror film with a hint of dark comedy that will leave you laughing or leave you dead. “Don’t kill me” “I’m a good person, I’m a vegan” but nothing will stop Bob when he’s lost his temper. Golub accentuates on his nickname “The Polish Mad Man” as he plays off his known temper, turning it into a movie. It’s a simple but absolutely brilliant way for a sixty year old comedian to turn his life into a budgeted film. Surprisingly realistic acting in this half realistic documentary, will make you suspend disbelief,if for only a second, as to what Bob Golub actually does after his show is over.