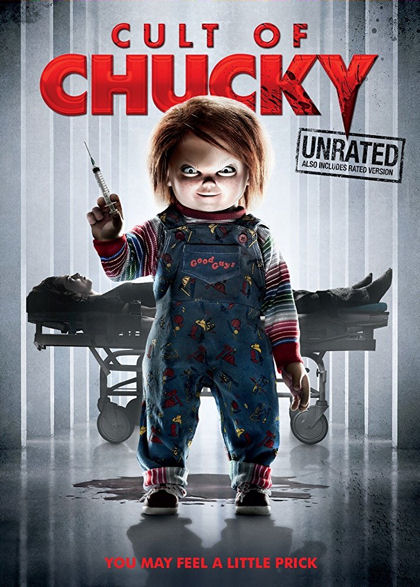 If you haven’t already, it’s time to join the cult. The curse continues as Chucky returns to terrorize the wheelchair laden Nica. After what happened in the cursed house, Nica is confined into an insane asylum. Doctors try to convince her that the killer doll isn’t real while Chucky is coming for his revenge. As Andy rushes to save her, this girl takes the offense against a Cult of Chucky’s. “A true classic never goes out of style.”

Chucky (Brad Dourif) is back alongside his love interest Tiffany (Jennifer Tilly). Original child victim Andy (Alex Vincent) is back with a vengeance along with Chucky’s new favorite victim Nica, played by Brad Dourif’s daughter Fiona. Daddy’s not only trying to kill his daughter, he’s also trying to take over her body. “And they call me sick.”

Production values are the lowest yet in the series. The sets are unrealistic studio perfection, removing the movie from any real world connection. Poor special effects on simple things like blood and important props like Chucky himself adds another unreal note to the film. I may be an old school fan but the doll in the last two films looks worse than it did when these films were Child’s Play.

Acting is reliably there besides the doctor who’s completely fictitious in both performance and actions. I enjoy the continuation of the series, picking up where Curse left off and bringing back Brad Dourif, Jennifer Tilly and Alex Vincent. The last two films have centered on Fiona Dourif who’s a fine actress in her own right. It was alright to bring in the daughter of your star for one movie but as she continues into this sequel her role has grown into taking over a franchise. While the lack of realism removes the viewers interest, the loose storyline doesn’t help bring it back. One Chucky, two Chucky, three Chucky, four, one was enough but they added three more.

Following up on the nearly series ending Seed of Chucky, writer, director and Child’s Play creator Don Mancini brought his vision back to its origins with the simplicity of putting a doll in a house and proving the series isn’t cursed. In recent years Mancini has written and produced two cult television favorites Hannibal and Channel Zero. In three short sequels for the Chucky franchise he’s taken it from wide theatrical release, to direct to video and now a made for TV quality film unveiled on subscription streaming service. After reaching its peak when Chucky took his Bride, the series struggles to hold on to its Cult fan base.