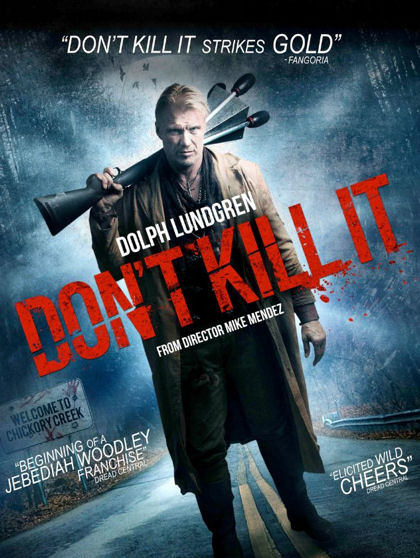 An ancient demon is unleashed on the small Mississippi town of Chickory Creek. An angelic FBI agent (Kristina Klebe) descends on the local police Chief (Tony Bentley) but the cops aren’t armed to stop this killer. Luckily Demon Hunter Jebediah Woodley (Dolph Lundgren) is in town. Teamed up with local authorities, the group must stop this body hopping demonic force that’s leaving a bloody trail of bodies behind.

Don’t let the cover fool you, this isn’t another Dolph Lundgren action movie to be overlooked. From the opening scene you’ll know if you like Don’t Kill It. With a Mortal Kombat yell, the body count rises as the gore level is maxed out. It’s a serious horror film that doesn’t take itself too seriously. Don’t Kill It is made in a modern day light of the Evil Dead, mixing comedy with horror and turning the kills up to another level. Action movie veteran Dolph Lundgren walks in off the street like the badass Demon Hunter he portrays. He’s cast perfectly in one of his best performances as our hero Jebediah Woodley. He may not be Bruce Campbell but his straight laced demeanor plays out well in the humorous situations surrounding him.

Don’t Kill It before you watch it because this isn’t one to let slip through the Netflix cracks. From the opening it’s just a lot of fun to watch. For any fan of the Evil Dead, Jack Brooks: Monster Slayer or the Feast series, I recommend you watch the latest creation of director Mike Mendez. I wouldn’t be surprised is Don’t Kill It finds a cult audience someday or at the very least maybe we’ll get a sequel.