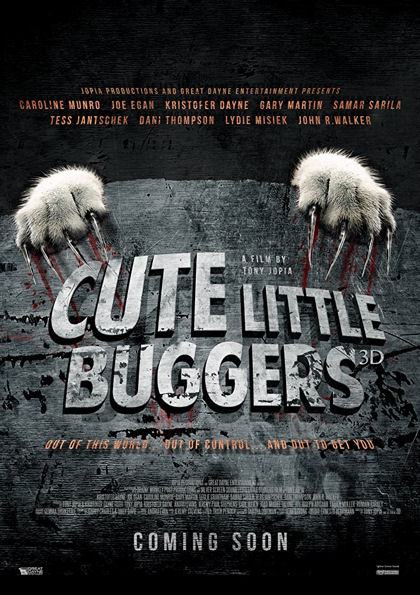 An endangered alien race is searching earth for females to mate with so they can avoid extinction. The aliens send hunters down to England to kidnap suitable women for impregnation. These tentacled hunters are inappropriately disguised as the most rapidly reproducing animal on earth, bunnies. It’s Bunnies vs Brits as the English take up arms to save their women. It’s a battle to extinction and no earthling may survive these Cute Little Buggers.

Cute Little Buggers, is a Cute Little Film. It’s the Shaun of the Dead of killer bunny movies. It’s light-hearted with one liner dialogue and off-the-wall comedy, set in absurd situations. Filmed on no budget this British import packs a lot of crude, frat humor and an excellent soundtrack into this Cute Little Bugger of a film. Not a breast goes unseen and the CGI blood flows like synthetic wine as bunnies run amuck in the English countryside.

I love the absurd simplicity of the spaceship aliens. Too bad it doesn’t transfer to the special effects. Cute Little Buggers decides to go with Ugly Big Effects instead of going practical like their incompetent but enjoyable spaceship aliens. I’ll be the first to admit that while cheap practical effects can be enjoyable to me, low budget CGI completely takes me out of the film. It’s something I find little enjoyment in. For those fans out there that love the ridiculous Syfy channel quality, poor CGI driven horror comedies, Cute Little Buggers packs some of the worst CGI monsters I’ve seen. It’s far raunchier and more enjoyable than sharks flying around in tornadoes. That being said, the sore thumb animated effects are an immediate mood killer for me in any film. You might say there are two kinds of film fans in this world. Those who like Syfy channel original movies and those who don’t. I am definitely one who doesn’t. Those of you who do should definitely look out for this Cute Little Bugger, even I found some enjoyment in this one.