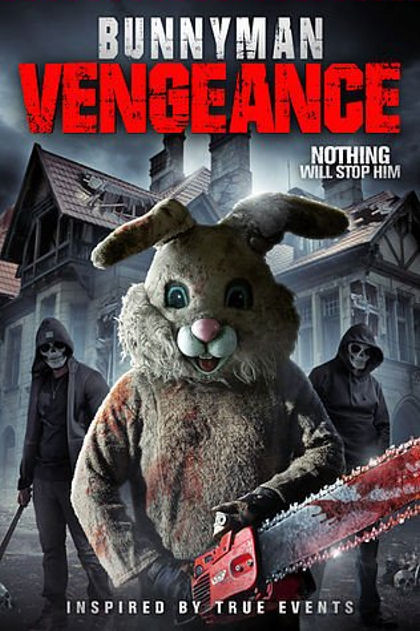 “Everyone knows of the one and only Bunnyman.” “Even the deaf kids from Guadalajara have heard the rumors about him. He’s come back home now. He’s been travelling all around the world for months on end, picking up all the bad habits from all the criminals around the world. Nobody knows how many people he’s killed. Nobody and I mean nobody is brave enough to ask him.” “Cover your eyes and ears, because yes, yes, the rumors are true. What you’re about to see can’t be unseen.”

There’s a killer coming home and he’s wearing a bunny suit. Based on “true events”, the Bunnyman killer is about to let his hair fly. Bodies will fall as we travel down this rabbit hole origin story. The Bunnyman returns home to find his family running a haunted house. His family soon realizes you can’t domesticate a wild animal. Bunnyman fills their haunted house full of dead bodies and no one makes it out alive.

While you’ve been pissing your life away on series like Halloween and The Texas Chainsaw Massacre, Carl Lindbergh has quietly made a Bunnyman trilogy. Bunnyman Vengeance is the third film written and directed by Lindbergh. “The deadly adventures continue of Bunnyman in the third and “final” film in the Bunnyman franchise.” If you’re asking yourself who is Bunnyman?, think Leatherface in a bunny suit. Lindbergh does well copying Leatherface into ruthless bunny form. I love the idea of a killer in a bunny suit. There’s just something about evil in a children’s costume that appeals to me. Bunnyman is a ruthless killer, with no age limits on who will survive.

The story is a bit disjointed in this low budget feature. Perhaps because I haven’t seen the first two films, my understanding of the continuity of the third act was a struggle. Then fifty minutes into the film, it breaks out into a music video. Maybe it wasn’t my lack of Bunnyman experience at all. The limited budget leads to some awful effects that completely took me out of the film. There's not excuse for a CGI eyesore after a shot through the head when a practical effect that would have looked realistic could have easily been done. I much preferred death by a tire thrown down a well, over a CGI impaling. Screaming, tortured, teens sets the fear but the CGI filled death ruins the pay off.

Bunnyman is obviously heavily Texas Chain Saw Massacre inspired. While it may not see of glimmer of the legendary slashers success, one thing is for sure, this is one hell of a haunted house.