Review of “Boo 2! A Madea Halloween” by Jason Minton 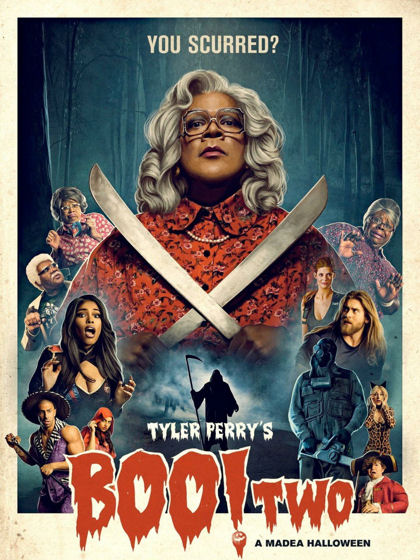 Madea is back for another Halloween fright this haunted holiday season. After last year’s fake scare factory you’d think everyone would have learned their lesson. Think again. When Tiffany (Diamond White) sneaks off to a party at a haunted lake, Madea, Joe, Bam, and Hattie have to go bring her hiney home. Lake monsters, chainsaw wielding madmen, little Japanese girls and the grim reaper itself stand in Madea’s way. I don’t think these boogeymen know who they’re messing with. Hellur!

I’ve got to admit that Madea is a guilty pleasure of mine. You either like it or you don’t. I also have to admit that while none of the Madea films are cinematic masterpieces, the three Madea movies Tyler Perry’s made that weren’t hammered out on stage as plays first are just plain awful. Love her or hate her, Madea movies usually have a heartfelt story underneath a man dressed in women’s clothing and there’s always a message to be found. The difference is that the heartfelt stories with messages that matter are stage worthy. The rest of these movies are just to make a dollar at the theater.

In her tenth film out, Madea takes on Halloween once again. If you watched Boo!, you’re about to get more of the same only not as well produced in Boo 2! Madea and the same cast of the original return on another Halloween adventure. Even Lexy Panterra, Mike Tornabene and Brock O’Hurn return looking way too old to be playing teenage children. There’s little script in Boo 2! It feels like someone came up with a way of rehashing the original into the same movie over again. The majority of the dialogue seems to have been come up with on the spot as Madea (Tyler Perry), Joe (Tyler Perry), Brian (Tyler Perry), Bam (Cassi Davis) and Hattie (Patrice Lovely) go back and forth with one another, fumbling over their words.

There are horrible voiceovers covering up foul language for the film to qualify for a PG-13 rating. I’m not sure what censor was okay with the characters saying damn fifty times but made them voiceover the other twenty times even though they also say motherfucker in the movie. I won’t blame that one on Tyler Perry but I can’t let him off the hook for making the worst Madea film to date. Unless you just loved Boo! A Madea Halloween, there’s no reason to go see Boo 2!