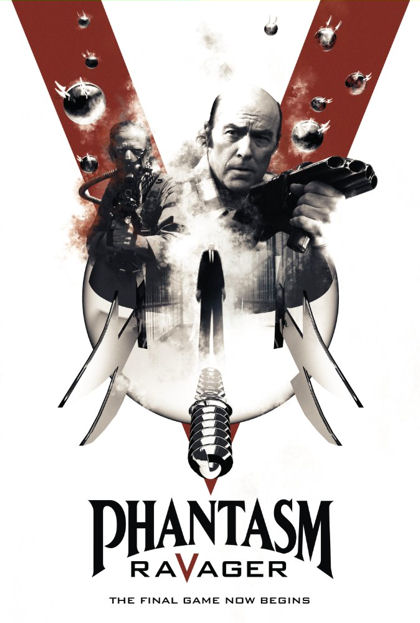 For five decades Reggie (Reggie Bannister) has battled the otherworldly mortician known as the Tall Man (Angus Scrimm). Fighting for his friends and revenge for his deceased wife and child, the once simple ice cream truck driver has turned into a legitimate four-barrel badass. When Reggie awakes in a hospital for the elderly, the reality of the last forty years is put into question. Has dementia set in as his loved ones keep telling him or is this just another ploy of the Tall Man? Reggie struggles for his sanity in the final battle for his life.

For the fifth and supposed final installment of the Phantasm series creator Don Coscarelli turns over the directorial reins for the first time in series history to his friend and Phantasm super fan David Hartman. Hartman makes his live feature directorial debut with Coscarelli producing. In line with the Phantasm series, Ravager follows the continual storyline of Reggie, Mike (A. Michael Baldwin) and the Tall Man. Hartman takes footage filmed for a never released webseries in 2008, transforming it into a completely different feature spanning nearly a decades. Together this release brings to conclusion an almost forty year battle.

Scarce on funds, the always low budget Phantasm films sinks to new depths. As we time warp between realities, we get as confused as the potential demented Reggie. Convoluted, Ravager is one sphere away from a total mess. History holds the movie together as the characters continue to compel. The final film questions everything you’ve known for forty years in an eye opening experience that lets the viewer decide where reality resides. The beauty is in the unanswered question, what is real? One thing is told to us for certain, “It’s never over.”