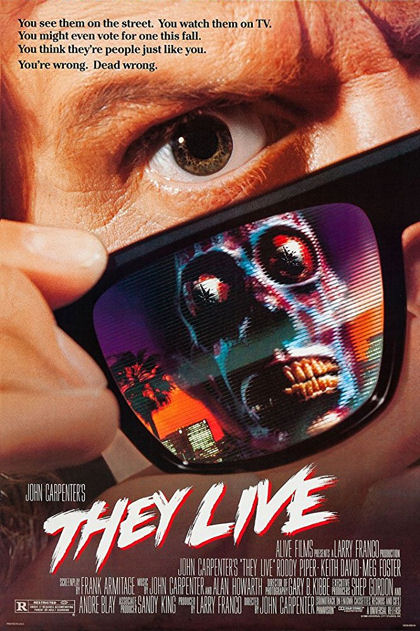 Down on his luck drifter Nada (Roddy Piper) finds his way to L.A. in search of work. Living on the streets, he struggles to make ends meet. When Nada picks up work on a construction job, he reluctantly befriends Frank (Keith David). The two take up residency with a group of homeless people building their own little community in a backlot of an abandoned block. Strange things are happening in L.A. and Nada’s curiosity has the better of him. Regular interference with the local television signal relays a broken message, “They are dismantling the sleeping middle class. More and more people are becoming poor. We are their cattle. We are being bred for slavery.” When Nada investigates the weird happenings he finds a pair of sunglasses that will change his views on the world. "Stay Asleep", "No Imagination", "Submit to Authority”, “This is Your God". The "formaldehyde faces" are living among us. “Who are they? And what do they want?”

What would you do if you were woken up by a pair of sunglasses, able to see the aliens living among us? Every ad is a subliminal message to obey. Roddy Piper said it best himself in one of the greatest action movie lines of all time, "I have come here to chew bubblegum and kick ass...and I'm all out of bubblegum." If no one saw them, no one believed you; would you take up arms and fight for your life? Would you conform?

I recently had the pleasure of watching this 80’s classic on the big screen. It blew me away that director John Carpenter let the first thirty plus minutes of film focus on his lead character and the optimistic struggles he’s going through. One third of this action, sci-fi, horror is slow paced and devoted to getting to know the lead character. All the while the settings, supporting cast and hints at the underlining story develop in the background. Carpenter artfully invests viewers into the film. Something that’s almost become a lost art in today’s filmmaking.

When Nada literally loses his grip on reality, the progression of his actions makes sense. Actual action in the film is limited. Yet we’re still given the best fight scene I’ve ever seen in a movie. It wasn’t that the punches are perfect. The sound effects are definitely overdone 80’s. What makes the fight scene superior to even today’s standards is its realistic, natural progression. Nada and Frank don’t want to fight. Frank is scared and wants his only friend to join him. Frank is simply defending himself. The more involved the fight becomes, anger comes out and they actually fight. Then in a moment of clarity each tries to stop it. The fight finally ends with no winners, just two losers who are too tired to continue.

The movie isn’t perfect. Like many movies in the 80’s the acting isn’t always true to life. The special effects of the aliens is still creepy to this day but closer up shots of their bodies reveal the suits the actors are in. The filmmaking style, score and art of telling a story still rein superior. Not to mention the wonderful concept of aliens living among us, the mindless cattle we are and questioning the human desire to consume, procreate and stay asleep. I have a much greater appreciation for Carpenter’s They Live having watched it as an adult. When rating it, I will obey.