Watching Movies - Hide in the Light

Review of “Hide in the Light” by The Headless Critic 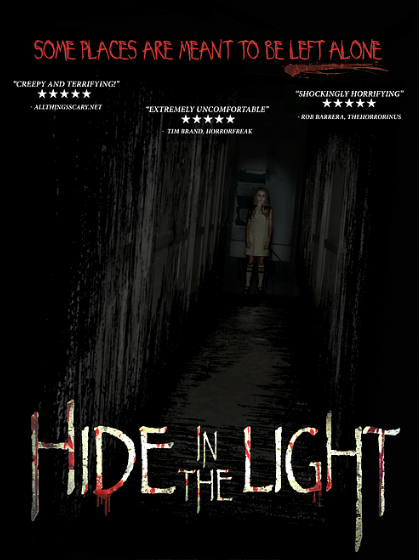 “Do you want to play a game?” Amanda does. In 1966 Amanda Peterson (KilieRae Condon) was brought to a church ran orphanage when her father mysteriously disappeared. Sensitive to light, Amanda is kept inside even at night. Don’t worry, she always has a friend with her. Amanda Peterson never left that orphanage even in death.

Some fifty years later a group of “Urban Explorers” set out for the now abandoned orphanage where Amanda spent the remainder of her life and death. Exploring Amanda’s final resting place these urban adventurers find audio recordings from the 1960’s of the church trying to rid Amanda of the supernatural friend attached to her. This may be the last abandoned building these urban campers ever get to explore. “Do you want to play a game?”

It’s unusual to have a large independent horror cast for a body count where every performance is solid. While not a character study by any means, this haunted cast has more depth than your typical slasher movie fair and everyone defines their roles well. Some placement of deep dialogue is off and reactions sometimes doesn't match the calamity of the situation. I’m still very pleased to say the cast of Hide in the Light shines. In fact filmmaking basics of score, cinematography, acting and even the little CGI used all succeed as studio production level of quality.

First time feature director and writer Mikey McGregor shows he doesn’t play in the dark. I’m usually one to complain about films being too dark but in this case Hide in the Light could have been a little darker. Intended jump scares get lost in the light. Even the demonic voice overs is a little too bright for what should be a dark movie. Young KilieRae Condon’s beautiful smile never really translates into anything scary, proving not all children are creepy! Budget may have caused limitations but I could have used a little more payoff in McGregor’s first feature outing. From consuming black masses to otherworldly image distortions, a lot is left unseen. I would have even liked a more satisfying finale.