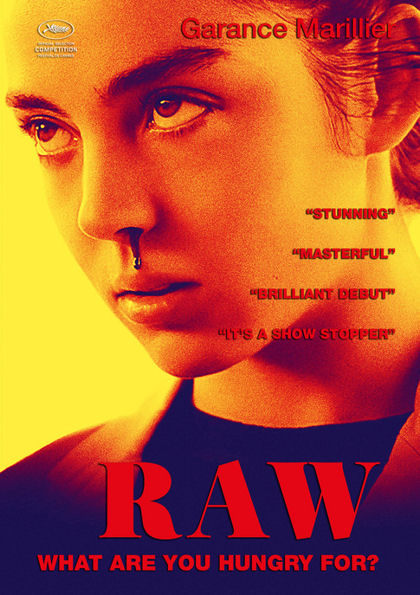 It’s rush week at veterinarian school. Following in her older sisters footsteps Justine (Garance Marillier) just entered her first year of medical school. As part of a traditional hazing ritual, Justine is forced to eat a piece of raw animal organ. Her sister Alexia (Ella Rumpf) even takes part, forcing this martyrdom. Until today, Justine was a strict vegetarian. Justine’s initiation to flesh causes an adverse reaction that manifests in a skin rash but grows into an insatiable hunger. Justine craves meat, even human flesh, including her own. Sisters bound by love are torn by flesh. “What are you hungry for?”

A coming of age, coming of cannibal story about a virginal teenage girl’s awakening to life. First time French director Julia Ducournau captures the viewers’ attention from the opening, shocking both character and audience in a bloodbath. The film that follows explores the sensuality of everything we put in our bodies. A teenage girl discovers her sexuality and an even more sensual consuming of flesh. The relationship between siblings is also opened up discovering just how far one will go for sisterly love.

Ducournau’s feature debut is a bold first venture into horror. It’s well acted and artfully shot, with an excellent story to tell. It isn’t just a good horror movie, it’s good cinema that is visually and thought-provokingly scary. I was enthralled with the story from the opening to the end and that end is one to stick around for.