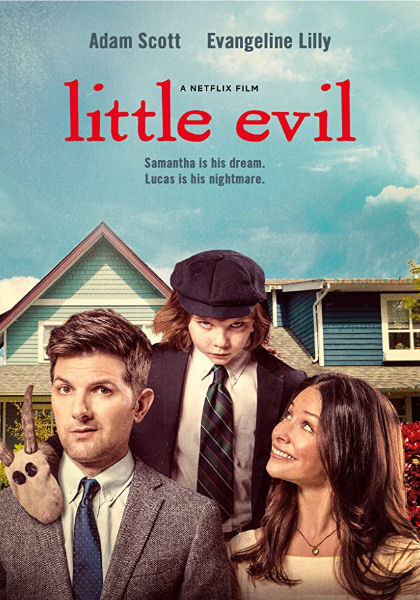 Stepping into the shoes of stepfather is a lot to take on for any man. Gary (Adam Scott) just married Samantha (Evangeline Lily), the woman of his dreams. He thinks her six year old son Lucas (Owen Atlas) may be the Antichrist. Gary attempts to become a replacement father to a young boy whose real dad may just be Lucifer. Satan is a lot to live up to.

With weird happenings all around him Gary does his best to disregard the numerous signs before him and win Lucas over with love. The family that prays together, stays together after all. When Gary begins to think Lucas may be trying to kill him, he has to reevaluate this whole marriage thing. Is Lucas the child believed by some religious cults to rise up from hell, rule mankind and bring on the end of the world as we know it? Or is he just a boy who’s about to turn six years old on June 6th? The signs keep coming of the second coming but this one would be an ascension from hell.

In 2010 a little film from a first time director surprised the horror community by coming out nowhere to largely be considered the greatest faux slasher in decades. Some even considered it the best horror comedy since the beloved Brit flick Shaun of the Dead several years before. While Tucker and Dale vs Evil didn’t become a box office sensation, it did put director Eli Craig on the map. Seven years later Craig follows up his cult favorite first film with his second feature, another venture into horror comedy with Little Evil. What Tucker and Dale did for slashers in the woods, Little Evil Lucas attempts to do for The Omen’s Damien. I do enjoy young Owen Atlas’s nearly silent role proving all kids are creepy.

In between his two films, Eli Craig turned to television. He returns to features in a made for Netflix movie that's shot looking like an extended sitcom. I usually don’t care about ratings but in this case the R rated Tucker and Dale is toned down to a family friendly TV-MA in Little Evil. The comedy is still there but doesn’t ring as true to an adult, playing out like a special dream episode of Modern Family or whatever your current favorite family based sitcom is. While enjoyable, it isn’t the inspiration of his first feature. I’ll still be there excited to see what Craig has to offer in his next film.