Watching Movies - Tigers Are Not Afraid 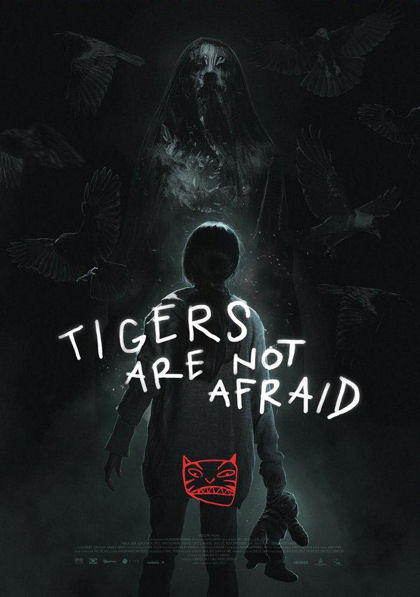 “There was this very rich dude, he had many wild animals. He had tigers, lions, pumas, panthers, jaguars… But one day the Huascas came and killed him. Caco and the other Huascas killed all his animals. But when they got to the tiger’s cage, he had escaped. Now he’s prowling the dark alley’s angry and hungry. He feeds on dogs, cats and children with no parents.”

A little girl haunted by the death of her mother finds refuge among a group of four homeless boys on the streets of a Mexico border town overrun by the Cartel. Street life in a drug torn country would be difficult enough but for Estrella (Paola Lara) the violence of the street doesn’t compare to an undead past that follows her.

A shattered reality of real world horrors weaves seamlessly with a fantastic child’s imagination creating an unanswered question of what’s metaphorical and what’s supernatural. Writer and director Issa López darkly films a feature that finds surreal beauty in a frightening existence. Mexico may have found their female equivalent of Guillermo del Toro spurning the telenovela driven society by creating beauty in fantasy horror. Where del Toro creates his own imaginary worlds that are elegant and engulfing to become part of, López stays grounded in an unreality that’s far more relatable but just as immersing.

The tigers that are not afraid in this feature are the streak that carry the film. Young Paolo Lara and her male counterpart Juan Ramón López excel in a cast of children at the direction of Issa López. López’s story mirrors the works of Stephen King when he’s at his best, writing of children. This Peter Pan adventure has real world consequences exploring the bystanders who are the forgotten victims of the Cartel. It is a heartwarming, heartfelt and heartbreaking horror story.