Review of “Revenge” by The Headless Critic 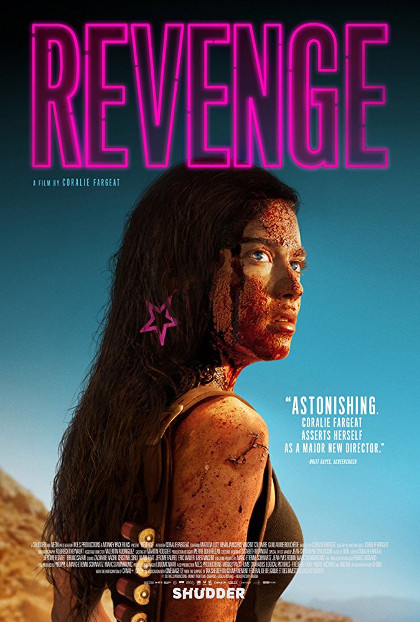 Jen (Matilda Anna Ingrid Lutz) is an astonishingly attractive, young woman. Her perfect body accompanies her youthful good looks. She’s flown in to a remote location to spend a few days with her married boyfriend Richard (Kevin Janssens) before he goes on his annual big game hunt with two of his closest friends. A girl wearing cheap, pink star earrings stands out of place in both class and youth, a child among men.

Jen is used to only getting the attention of her wealthy man part-time as his mistress. Now she’s the only woman around for miles. Not only does she have his undivided attention, she’s also caught the eye of the other men of the house. When her boyfriend’s back is turned the naive young girl is assaulted. This is only the beginning of her introduction to the reality of the world. An unforgivable act of violence is committed but nothing is as heartbreaking as being turned on by the one person who’s supposed to love you. On this annual hunting trip the prey isn’t what you thought it would be. Revenge is coming and there will be blood.

First time feature director and writer Coralie Fargeat brings a woman’s perspective to the familiar rape, revenge storyline. She couldn’t have done a more brutal job. Rape isn’t even shown, just alluded to which makes it far worse. A slow build leads to all out revenge. Buckets of blood are thrown at the screen. Few movies make me cringe, I cringed at Revenge. The small cast of four doesn’t leave room for a lot of revenge but each moment of pain is felt through their characters. Small details and some logic do get overlooked but any logic or character reaction where realism is lost is done so for the sake of impact. Cinematography and scenes are both set to stun, shock and impress and they succeed.

1970’s films like Straw Dogs, Deliverance, Last House on the Left and I Spit on your Grave brought the realistic terror of rape in exploitation shock value and often times humor. Later films like the female directed American Mary chose stylized revenge, exploring the dark world of body modification as a punishment. Elisabeth Salander even built a franchise off the sub-genre. Revenge joins these elite films as the action movie version of a rape revenge film that brings the blood. It might just be the goriest of them all.

Matilda Anna Ingrid Lutz plays sexy, naive youth and badass so perfectly in a three act progression of character it makes me question if the actress isn’t all three in real life. When she's sexy, her pink star earrings stand out of place among a group that would wear diamonds. When she's struggling to survive, her pink star earrings are bright among the grit of the happy, beautiful girl she was just moments ago. As she seeks revenge, her pink star earrings are a reminder she's a youth turned killer. The distant glare in the eyes of Matilda Anna Ingrid Lutz during her Peyote scenes really shows just how excellent this young actress is.

***Spoilers Ahead***
Her opposition includes a two faceted role from Guillaume Bouchède who plays the disgusting fat bystander who turns badass just in time to die. Vincent Colombe is a coward all the way. From overpowering those smaller to not having the guts to finish them, this is the character you’ll love to see suffer but not be able to watch when he does. Kevin Janssens is the privileged asshole in every sense of the term. The final battle took a lot of balls to film, literally. I’m impressed with any actor willing to freely put themselves out there for the betterment of their film.

The year is young but Revenge is definitely a top five film for horror so far this year. Be warned, not everyone will have the stomach for it.