Review of “Altered Perception” by The Headless Critic 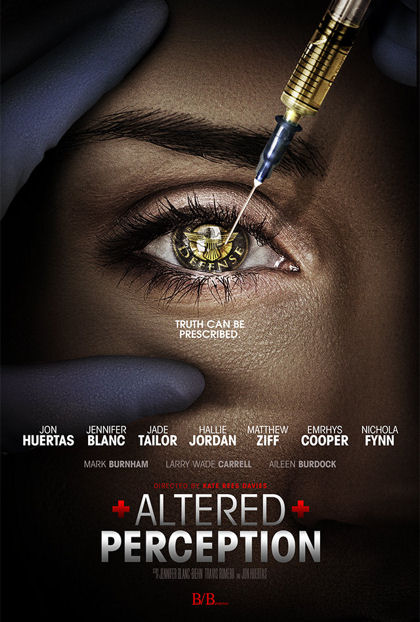 “Drugs are tested by the people who manufacture them, in poorly designed trials, on hopelessly small numbers of weird, unrepresentative patients, and analyzed using techniques which are flawed by design, in such a way that they exaggerate the benefits of treatments.” –FORBES

Case # 234860
Three couples whose relationships are being torn apart by conflict are chosen as test subjects for the newest drug to potentially hit the market. By the end of the study, someone will be murdered. Constant surveillance is there to capture every moment of their downward spiral as their lives and death are exposed on camera. The following footage is confidential property of the company contracted by big pharmaceutical to conduct this test. How do you determine if a drug does more harm than good? Their job is to observe and document the results, not to determine if the side effects outweigh the possible benefits.

Andrew (Jon Huertas) is dating a former prostitute Lorie (Jennifer Blanc-Biehn). Needless to say, issues about her past have arose. It doesn’t help that Lorie literally doesn’t know the meaning of the term mutually exclusive. Are past actions and experimental pharmaceutical aide enough to cause a jealous case of murder?

Emily (Hallie Jordan) and Beth (Nichola Fynn) have been together about two years. They were on the verge of marriage but Emily thinks Beth secretly craves cock. Since the two started developing issues, Beth has claimed Emily’s brother Justin (Matthew Ziff) raped her. A claim Emily just can’t believe. Is this a family torn by a pseudo lesbian or has Emily sided with family against the love of her life? Maybe pharmaceutically induced murder will solve this family crisis.

Steven (Emrhys Cooper) and Kristina (Jade Tailor) have been having marital problems. Steven’s job has become so demanding that Christina has grown insecure in their relationship. Her belief that he wants to leave her is causing him to want to leave. The more distant he grows, the more she begins to think he’s seeing someone else. Is this woman is scorned to a murderous revenge or perhaps experimental pharmaceuticals pushed someone on the edge, over it. Maybe a man can only take so many accusations before he snaps. Death is coming for someone at the end of a tiny, little pill.

A couple of women bring a dialogue based, relationship horror story to the big screen. Actress and co-writer Jennifer Blanc-Biehn and first time feature director Kate Rees Davies turn a growing trend of Women’s Murder Club tv shows into a feature film. The heavily relationship based story plays out as an investigation into what happened with only the ending showing who Snapped. The film also tackles a larger issue of irresponsible and unsupervised pharmaceutical testing in a Lifetime style movie of three connecting tales. I’m not sure the Altered Perception of an audience used to documentary style television shows will translate into a scripted feature. I’m also probably not the first intended target for such a movie.

“Prescription drugs kill some 200,000 Americans every year. Will that number go up, now that most clinical trials are conducted overseas-on sick Russians, homeless Poles and slum dwelling Chinese-in places where regulation is virtually nonexistent, the F.D.A. doesn’t reach, and “mistakes” can end up pauper’s graves? The authors investigate the globalization of the pharmaceutical industry, and the U.S. Government’s failure to rein in a lethal profit machine.” –VANITY FAIR

In Select Theaters & on VOD May 4th