Review of “The Cleanse” by The Headless Critic 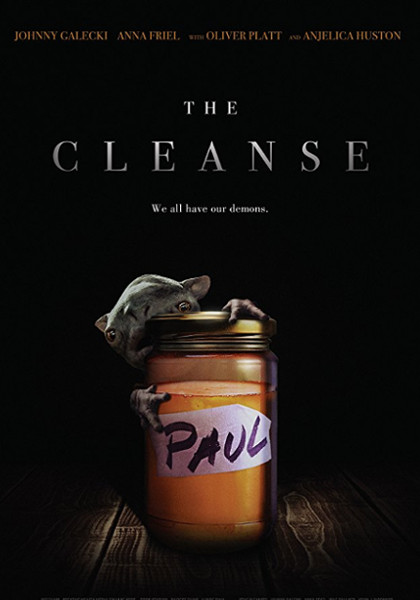 Who’s ready to change their lives today? The newest fad to hit the health crazed market isn’t something you’re going to find over the counter at your local grocery store. Ken Roberts (Oliver Platt) is running a spiritual retreat that offers a special cleanse to rid the body of a lifetime of toxins. “Once you finish this it will be a beautiful thing.” Not everyone gets in and money isn’t a factor. Insert Paul (Johnny Galecki), a typical nice guy with a dead end job who’s struggling to get over his fiancée who recently dumped him. To Paul’s surprise he passes the extensive test for this experimental retreat. It isn’t unusual to have to drink something nasty when you’re cleansing your body. It is unusual to vomit your bodies toxins back up into a living creature. It’s time for the master cleanse. It's time to face your demons. Let’s get pure!

The long awaited debut feature from Bobby Miller is a clean cut, studio quality movie that builds into a perfect indie film ending. Miller’s vivid but dark debut is reminiscent of Tim Burton in look and magical sound but done in an independent style without all the big budget theatrics. The dark but comical set-up of expelling your body’s toxins into a tadpole, turd of a creature is a quirky concept. The Cleanse thrives in darkness but is kept light in a comedy of horrors. A little romance between Paul and Maggie (Anna Friel) surrounds the real progression of facing one's weakness of body and mind. Angelica Huston amazes as usual as Liily, the assistant to the Master Cleanse.

Having gone into The Cleanse knowing little about it, there’s a long build where you’re not sure exactly what direction the story will take. Giving mouth birth to a toxic baby wasn’t what I expected. The entire movie the audience waits for that big moment. It isn’t delivered in theatrical form. The experienced short film director gives us an open ended indie film ending that’s more thought provoking than eye pleasing. I enjoyed the contrast to what we usually see. A mass audience may not receive it the same way which may be the reason this one hasn’t been more widely distributed in theaters already.