Review of “The Jurassic Games” by The Headless Critic 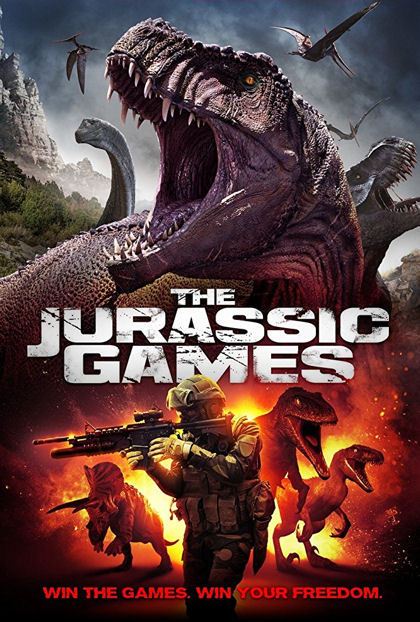 In the near future, death row has become a reality show. Death row inmates who have no recourse but to wait to die are given an opportunity at life and freedom. Those who choose a chance at life compete in a virtual reality game show against dinosaurs where dying in the game means your lethal injection date has just been bumped up. The pain they feel in this virtual world of dinosaurs is real. Just like the pain they inflicted on their victims who landed them on death row. Die in the game, die in real life. Be the last to survive, you “Win the games. Win your freedom.” It is time for The Jurassic Games! Can you survive extention?

If Jurassic World and the Hunger Games had a baby, it would be The Jurassic Games. Ok, I admit it’s more like if Arnold Schwarzenegger from The Running Man impregnated the T-Rex from Jurassic World but for namesake we’ll go with The Hunger Games. Like The Running Man, a futuristic world driven by reality tv gives convicts on their way to lethal injection a chance to survive. Instead of battling for their lives against trained killers in the slums of the real world, this new form of execution is done in a controlled VR setting for the camera’s eye but with RL consequences. Nature’s most deadly natural born predators are the world’s newest electric chair. All these criminal have to do is not get killed by a bunch of Dinosaurs, or each other.

Ten contestants enter the games, wait, a T-Rex just ate Dr. Eli Franklin (Sidney Flack). Nine contestants continue in the games, one will live and nine will die. Protestors be damned and morality questions of death for profit aside, 300 million Americans agree, they want their Dino-Deaths. This years contestants include the youngest yet to enter the games. She goes by “Joy” (Katie Burgess) because she’s just a bundle of murderous joy. She’s here to kill everybody. The newest “it” case to be popularized on television of a husband killing his wife has just devoted their convicted killer Anthony (Adam Hampton) to battle dinosaurs for reality ratings. William, Victor and Ren (Tiger Sheu) have been entered into the games to hit those target African American, Latino and Asian markets. Maneater Stephanie (Cate Jones) is in for added sex appeal and Albert (Luke Wyckoff) may just be the craziest on of them all! That lineup is gorgeous on camera. Right now they’re hitting all the key demographics.

I have to admit, as a critic who’s very critical of any movie I might someday find on the SyFy channel, The Jurassic Games is better. The love lust name of two franchise films combining together cheapens what is actually a fun movie. Effort was actually put into some quality CGI. Sure it’s too clean cut to be perfect but under the guise of being virtual reality, most of it is forgivable. A familiar variety of characters is put together to die similar to the aforementioned Hunger Games and The Running Man. The best of the cast may be in the control room with Entourage and Old School vet Perrey Reeves and a familiar face from somewhere The Host Ryan Merriman.

I’ve reviewed all three of director Ryan Bellgardt’s feature films and I have to say that I’ve seen the improvement with each one. With a little bit more grit, realism and perhaps a name change, I could see the familiar set-up of The Jurassic Games being something theatrical. Don’t let this one slip under the radar of budgeted CGI films you avoid. The Jurassic Games should please the Syfy and action horror audiences who aren’t scared off by the concept alike. I could even see a franchise.